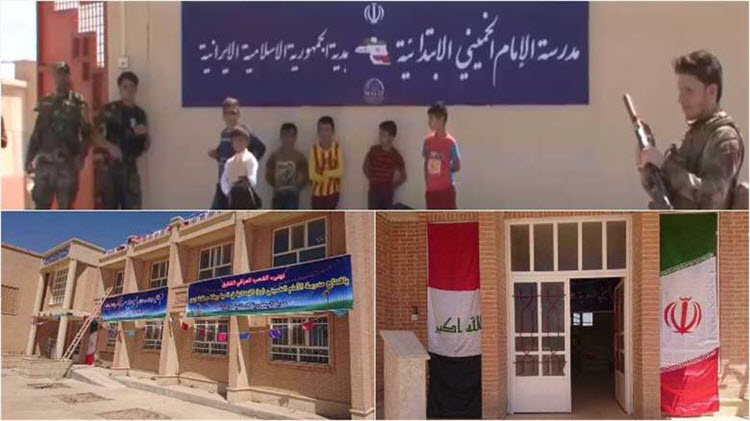 London, 19 Sep – The establishment of an Iraqi primary school that bears the name of Ruhollah Khomeini, founder of the Iranian Regime, has incited controversy over Iranian interference in Iraq and has even been labelled a “provocation” to residents.

The “Imam Khomeini” school, near Mosul, northern Iraq, was opened last week, despite warnings from several Iraqi politicians that it would be divisive for the people of Iraq.

Many activists and critics have taken to social media to express their shock, disapproval. and confusion over naming a school after an Iranian cleric, when Iran is openly trying to seize control of Iraq in the wake of ISIS’s retreat.

Among them was the former governor of Nineveh, Athil Nujaifi, who said via his Facebook page that the opening of the “Imam Khomeini” school in Bartla is provocative to citizens.

He said: “Iraq is barely coming out of a whirlwind to find itself in a new spiral without a solution or a vision. We still rely on the international intervention to resolve the crises that we are creating with our weak planning and the absence of our vision.”

He continued: “Mosul emerged from the authority of ISIS without a vision and in the absence of security services and a political role for the Sunni society, which is supposed to be active, a primary school named (Khomeini) start with a new provocation to citizens.”

Hussein Hamid, director of the school buildings department at the Education Directorate of Ninawa, attempted to defend the project by claiming that the Iranian Regime had funded the building of the school, in the village of Khazna in the area of Bartala east of Mosul, and therefore deserved to name it.

He told the Anatolia news agency: “A dispute between Nineveh Education Directorate and the beneficiaries of the project was raised as the school was registered as Al-Zahra School, but on the ground it stayed Imam Khomeini.”

He continued: “The school was built at the expense of the Islamic Republic of Iran, with a capacity of 10 classes. The school was opened Thursday by the Iranian consul in Erbil (Murtada Abadi), who came to the area specifically for opening it.”

Hamid said that the school had actually been built in 2014, but wasn’t opened at the time because the so-called Islamic State (ISIS) had entered Mosul at the time. The building was damaged during the ISIS occupation and has now been refurbished, which is why it was only opened last week.

AP: The head of an Iranian exile group says...

Arab Nations Rally Behind Morroco and Against Iran