Iran Regime Must Be Brought to Justice Over 1988 Massacre 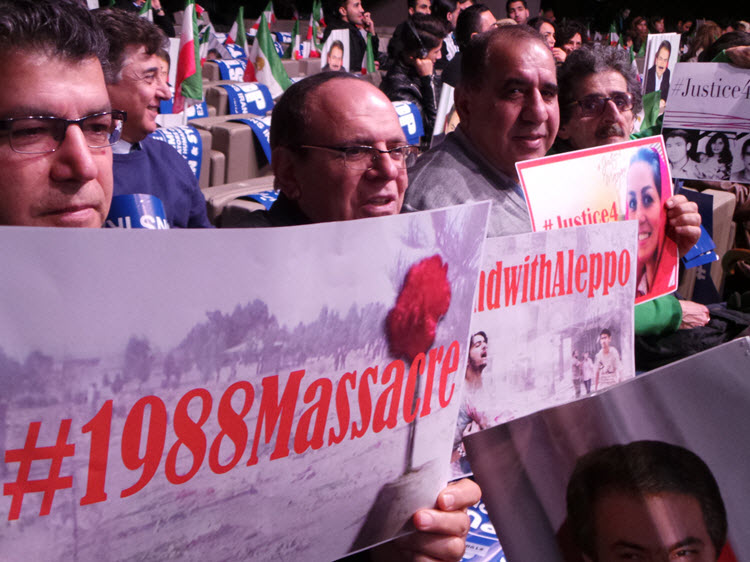 London, 19 Sep – The Iranian Regime is responsible for one of the most horrific crimes against humanity of the 20th Century but the international community has largely met this with silence.

In 1988, the Iranian Regime slaughtered around 30,000 political prisoners, mainly members and supporters of the leading Iranian opposition movement, the People’s Mojahedin Organization of Iran.

Yet no one has ever been brought to justice.

Nasser Sharif, president of the California Society for Democracy in Iran, wrote an op-ed for the Orange County Register explaining why the international community cannot allow the Iranian mullahs to get away with their crimes any longer.

He wrote: “Secrecy was reinforced for several decades by a conspiracy of silence orchestrated by the clerical regime. So, despite the tremendous human cost, the episode effectively went unacknowledged. Any call in Iran for an investigation was severely punished.”

Indeed, while the people who committed these vile crimes were rewarded with high-ranking positions in the Regime, those who spoke out against them were punished with imprisonment, torture, or execution.

Sharif cites the case of the late Ayatollah Hossein Ali Montazeri, former second-in-command in the Regime, who recorded himself condemning the Death Committee members for their roles in “the greatest crime of the Islamic Republic”.

He was demoted and put under house arrest until his death in 2009. When his son Ahmad released the audio recording last year, he was jailed for acting against the Regime.

While Maryam Akbari Monfared, a political prisoner who demand to know what happened to her siblings in 1988, is being denied vital medical care.

How can this be right?

At the annual Free Iran gathering in July, the President-elect of the National Council of Resistance of Iran, Maryam Rajavi, called for justice for the victims and their families.

She said: “Khamenei and other leaders of the regime must face justice for flagrant violations of human rights and their crimes against humanity, particularly the 1988 massacre of political prisoners in Iran and for their war crimes in the region.”

This was echoed by UN Secretary-General Antonio Guterres, who wrote in August: “The families of the victims have a right to know the truth about these events and the fate of their loved ones without risking reprisal. They have the right to a remedy, which includes the right to an effective investigation of the facts and public disclosure of the truth; and the right to reparation.”

The world needs to know that Iran’s human rights abuses did not end in 1988, but are integral to the Regime’s survival today.

Sharif wrote: “The world needs to act to bring long overdue justice to the victims of this massacre. The U.S. Congress has acted appropriately, filing House Resolution 188 in March, which urges the U.S. administration “to publicly condemn the massacre” while calling on the UN “to create a Commission of Inquiry to fully investigate the massacre.” Sponsors include the Chairman and Ranking Member of the House Foreign Affairs Committee, Ed Royce, R-Calif., and Eliot Engel, D-N.Y., with 56 co-sponsors (30 Republicans and 26 Democrats) to date.”

He continued: “Despite a harsh crackdown, in universities and on the streets, in blogs and social media, the Iranian people are demanding justice. The regime’s rabid reprisals, however, emphasize that genuine change will not come from within its decaying halls of power. It will come will come at the hands of the Iranian people and their organized opposition movement, which has already paid a hefty price for freedom. More power to them.”