Iran Policy on Iraq Shows US Sanctions Are Working 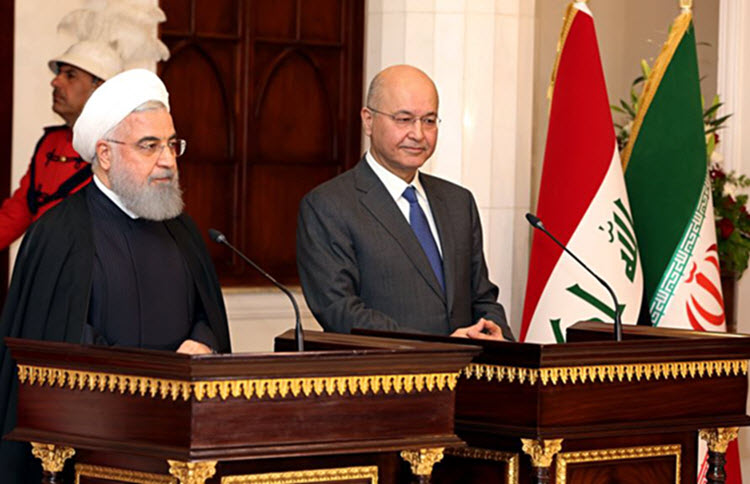 Iran’s renewed embrace of Iraq, shows that the US sanctions on Iran are working, according to political scientist Dr Majid Rafizadeh.

Iranian President Hassan Rouhani visited Iraq last week for the first time since becoming president in 2013 and this is a clear indication of how renewed US sanctions have damaged Iran because the mullahs are now desperate to find other countries willing to do business deals with the increasingly isolated Iran.

This isolationism began last year when the US pulled out of the 2015 nuclear deal and reimposed nuclear-related sanctions on Iran, which did severe damage to Iran’s energy, automotive and banking sectors. Iran’s oil revenues and exports, which make up 70% of Iran’s GDP, have fallen by roughly half since the sanctions came into place.

The Iranian banking system has failed to stabilize the country’s currency, with the rial dropping by about 30% since the start of 2019 and trading at 135,000 rials per US dollar, while the International Monetary Fund believes that Iran is officially in recession.

Things are also about to get worse for Iran with the US planning to tighten its financial chokehold, which will severely affect Iran’s planned budget for the upcoming Iranian year, beginning on March 21. Iran’s proposed budget bill for 2019 was less than half that of the year before, but the money needed to fund it is still dependent on exporting roughly 1.5 million barrels of oil a day; something that will not happen once sanctions waivers, issued by the US to eight countries, end in May.

So Iran is trying to use Iraq to bypass US economic pressure, which is why Rouhani is rushing to sign trade and energy agreements with Iraq in order to raise its bilateral trade volume with Iraq from $13 billion a year to $20 billion.

However, Iran also wants to use Iraq to score a strategic and geopolitical victory against the US, by showing that the mullahs have political and economic dominance in Syria, Lebanon, and Iraq. Indeed, the mullahs have already been caught intervening in Iraq through militias and interfering in the political process.

Dr Majid Rafizadeh wrote: “Iran has [been] attempting to control Iraq and dictate its foreign policy by fueling sectarian conflict in the country. This heightened meddling led to Iraqi Vice President Ayad Allawi calling on Tehran to stop interfering in his country’s internal affairs.”

Iran to hold new round of talks with IAEA

AFP: Iran will hold a new round of talks...

UPI: A military faceoff with Iran is less likely...