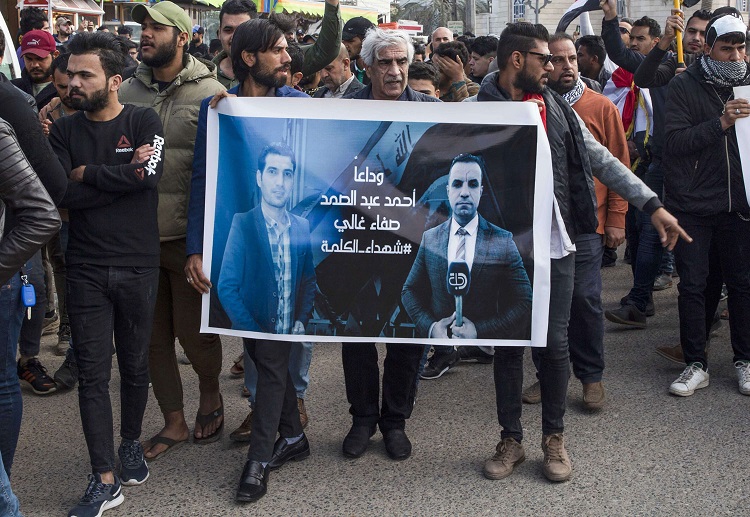 An Iraqi journalist and his camera operator were murdered by Iran-linked paramilitary forces for criticizing the destructive role of the Iranian forces in Iraq.

Ahmad Abdul Samad, who worked for Dijla TV in Basra, southern Iraq, posted a video on Facebook on Friday, in which he protested the Hashd al-Shaabi (PMF) for attacking journalists for covering the nationwide protests in Iraq. He also criticized the largely Iran-led Iraqi security forces for attacking peaceful anti-government protests in Basra but doing nothing to stop protests by Iran-backed militias at the US Embassy in Baghdad.

Just three hours after posting the video, Abdul Samad was found dead in his car with a bullet wound to his head along with camera operator Safa Ghali, who was shot in the chest but alive. Ghali died en-route to hospital.

Angry local residents gathered around Abdul Samad’s home in Basra to protest the crimes of Hash al-Shaabi and the Iranian government. Other protesters gathered outside the police command headquarters to demand the release of arrested protesters.

Ignacio Miguel Delgado, the Middle East and North Africa Representative of the Committee to Protect Journalists said: “No journalist should have to fear for their safety or be singled out for attack over their coverage of protests. We call on the Iraqi authorities to immediately open an investigation into the killing of Ahmed Abdul Samad and Safaa Ghali and to do their utmost to ensure journalists can cover the protests freely and without fear of reprisal.”

It’s important to note that Iran-backed militias have murdered hundreds of Iraqi protesters since the nationwide uprising began in October. Qasem Soleimani, the ayatollahs’ terror mastermind who ordered the majority of these murders, including the use of snipers against protesters, was killed on January 3 by an American drone strike.

On a related note, protests are continuing in other parts of Iraq.

In Karbala, young people and security forces clashed, with the people of Karbala choosing to block roads with burning tires. Gunshots were heard in the streets.

In Baghdad, despite intense security measures by the Iraqi police and army, Al-Arabiya and Al-Hadath reported that hundreds of protesters gathered in the Senek Bridge on Friday.

“These protests are happening while the army and security forces went through great efforts to prevent them,” Al-Ayam wrote.