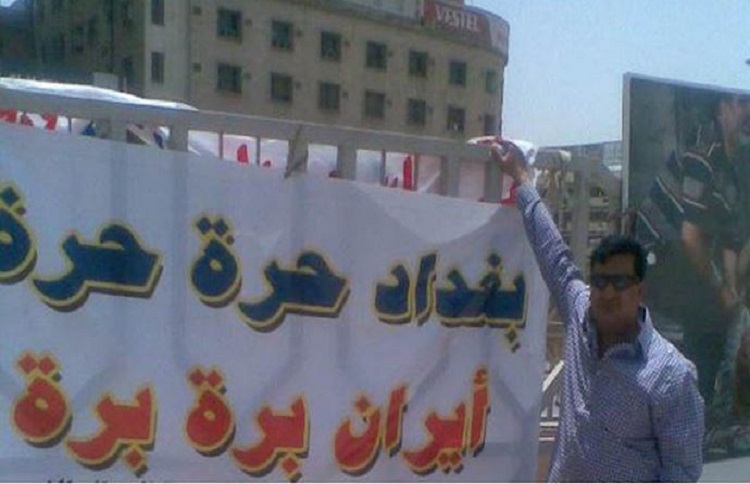 James Jeffery, the United States Special Representative for Syria Engagement and Special Envoy to the Global Coalition To Defeat ISIS,

announced that the US talks with the Iraqi government on June 11 for the coalition’s assistance to Iraq will be one of its pillars in dealing with the Iranian regime’s manipulation problem. In a teleconference on June 5  he noted:

“So basically we’ll present where we plan on helping Iraq, where we think the coalition can continue to help Iraq in the fight against Daesh, but also to recover from COVID-19, to deal with the very dramatic fall in oil prices on which Iraq is particularly dependent, and to deal with the problems with Iranian encroachment on Iraqi sovereignty.

Iran’s Kayhan newspaper which is affiliated with the regime’s supreme leader Ali Khamenei, in fear of losing its power and influence in Iraq, rushed to the tribune, and on 7 June in an article with the title, ‘Iraq and the dangers of June 10!’ wrote:

“What opportunities and threats do these negotiations have for both sides, and especially for the Islamic Republic of Iran? From the American side’s point of view, the Iraqi delegation must choose between giving political concessions to the other side and enduring the damage and pressures caused by terrorist acts.

“The negotiating table was set on Wednesday at the request of the US side, and if the situation continues as it has in recent days, the Iraqi side will be passively involved in the talks, resulting in the signing of an agreement that will not only solve Iraq’s problems, but it will become the ‘Mother of problems of Iraq’ itself.

“This is because the new agreement is based on the continuation of the US military presence in Iraq, and this presence will be only to frame Iraq’s foreign relations and deprive it of a security relationship with the most important regional supporters of Iraq (Which means the Iranian regime). At the same time, such an agreement will inevitably upset Iran.”

Kayhan added: “Another point that is painful is that a well-known political movement that has made resolving Iran’s issue with the West its most important strategy has in recent months and weeks made repeated contacts with some Iraqi Shiite leaders to try to persuade them to direct negotiations and concessions, and ultimately abandon strategic issues such as the expulsion of US troops from Iraq.

“From the perspective of these individuals, Iraq, given its sensitive position in Iran’s regional situation, could be the starting point for Iran’s “forced turn” in regional politics.”

Reduced Iranian influence in Iraq after the death of Qassem Soleimani

According to an analysis by the British newspaper “Telegraph”: “When Mr. Solaimani was killed by a US drone strike during a visit to Baghdad in January, Iran vowed “severe revenge” against the US through its proxy militias in Iraq. The pro-Iranian bloc in Iraq’s parliament also demanded the withdrawal of the 5,000 US and coalition troops in Iraq to help fight Islamic State.

“Nearly six months on, though, the foreign troops are still stationed across Iraq and look set to stay for some time. And apart from a rocket attack on a coalition base in March that killed a British soldier and two Americans, Iran-backed Shia militias have yet to make good their threats to avenge Solaimani’s death in spectacular fashion.

“Moreover, Iraq has just appointed its most pro-Western prime minister in years. Mustafa al-Khadimi was sworn in earlier this month, replacing Adel Abdul Mahdi, who stepped down last November in the wake of huge anti-government protests.

“A crunch point looms in mid-June when the US and Iraq are expected to hold a “strategic dialogue” conference to set out their future relationship. Far from bowing to demands to withdraw all troops, America and the wider coalition is likely to lobby for a continued – albeit smaller – presence to ensure that the Islamic State does not resurge.

“Esmail Ghani, a senior commander in Iran’s Revolutionary Guards, visited Baghdad in late March, in a bid to exercise sway over the choice of the new prime minister. But as a non-Arabic speaker who lacks both Mr. Solaimani’s warrior charisma and personal connections, the reception was lukewarm. Some senior Shia leaders declined to meet him.”

What is clear is that the wall of Iran’s castle of influence and sovereignty in Iraq is cracking, so Iranian officials are right to be fearing for the future. In the past, Iranian authorities constantly claimed they were marching ahead in the region and that their forces were on the frontlines of the West Bank. Not only did it fail to reach that target; it is now losing its main strategic point which is Iraq. This is mainly due to the death of Qassem Soleimani and the Iraqi people’s protests that have been ongoing for several months.

AFP: Fresh US sanctions aim to "expose and disrupt"...