Reuters: A senior Iranian cleric has decreed dogs are “unclean” and should not be kept as pets — a move aimed at discouraging Western-style dog ownership in the Islamic state, a newspaper reported on Saturday. 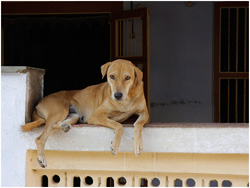 TEHRAN (Reuters) – A senior Iranian cleric has decreed dogs are “unclean” and should not be kept as pets — a move aimed at discouraging Western-style dog ownership in the Islamic state, a newspaper reported on Saturday.

Dogs are considered “unclean” under Islamic tradition but, while relatively rare in Iran, some people do keep them as pets.

By issuing a fatwa — a religious ruling — Grand Ayatollah Naser Makarem Shirazi has sent a clear message that this trend must stop.

“Friendship with dogs is a blind imitation of the West,” he was quoted as saying in Javan daily. “There are lots of people in the West who love their dogs more than their wives and children.”

Guard dogs and sheep dogs are considered acceptable under Islamic law but Iranians who carry dogs in their cars or take them to public parks can be stopped by police and fined.

The Koran does not explicitly prohibit contact with dogs, Shirazi said, but Islamic tradition showed it to be so. “We have lots of narrations in Islam that say dogs are unclean.”

The interpretation of religious rules on personal conduct is a constant source of debate and potential conflict in Iran which has been an Islamic republic since a revolution ousted the Western-backed Shah in 1979.

In a television interview last week, President Mahmoud Ahmadinejad weighed in on the issue of the Islamic dress code, saying women who fail to cover their hair completely should not be harassed by the police.

Morality police are conducting their annual crackdown and women who reveal strands of hair are liable to be stopped in the streets for failing to respect the dress code, or “hijab.”

Ahmadinejad’s surprisingly liberal view was condemned by fellow hard-liner politicians and senior clerics “I wish he had not said those words about the hijab,” Grand Ayatollah Ahmad Jannati told the faithful during the week’s Friday prayers, in a rare criticism of the president.

“We are grappling with many problems including economic and political ones but the issues of morality and ethical security are among the important issues that cannot be ignored,” he said.

Tehran University has set up a thinktank “to investigate the problems related to hijab,” the representative of Supreme Leader Ayatollah Ali Khamenei to the university announced on Monday.

VOA: President Bush says Iran has the right to...

AFP: Iran's ambassador to Iraq was slightly injured in...