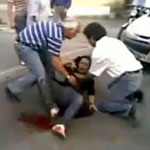 AFP: The killer of Neda Agha-Soltan, whose shooting death during a street protest against last summer’s Iranian election was flashed around the world on the Internet, must be brought to justice, Amnesty International demanded on Saturday. 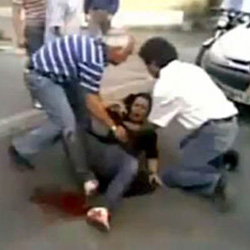 LONDON (AFP) — The killer of Neda Agha-Soltan, whose shooting death during a street protest against last summer’s Iranian election was flashed around the world on the Internet, must be brought to justice, Amnesty International demanded on Saturday.

“One year after the killing of Neda Agha-Soltan, the failure of Iranian authorities to bring her killer to justice is a damning example of the culture of impunity that has widened since the 2009 election protests,” Amnesty said on the eve of her June 20 death.

“Neda’s unlawful killing is emblematic of not only the numerous human rights violations committed against Iranians over the past year — which are still continuing today — but also of the government’s steadfast refusal to bring to justice those responsible for torturing and killing its critics,” the London-based group’s Hassiba Hadj Sahraoui said in a statement.

Agha-Soltan, 26, became an icon of the post-election uprising against Iranian President Mahmoud Ahmadinejad after a mobile phone video of her bleeding to death during a protest in Tehran was posted on the Internet.

Dozens of people were reportedly killed in street battles between security forces and protesters, especially in Tehran, following an election that reformist leaders charged had been rigged.

The regime crushed the protests, rounding up pro-reform politicians and journalists and unleashing the feared Basij militia on those who dared to demonstrate.

In its 2009 annual report, Amnesty charged that “compelling evidence emerged that a number of detainees, both women and men, had been raped and otherwise tortured in detention.”

The authorities reacted furiously to the accusations of rape, first made by opposition leader Mehdi Karroubi.

But they were forced to admit abuses at Tehran’s notorious Kahrizak detention centre, which was closed after at least three protesters died of injuries there.

Iran also has sentenced 10 protesters to death and hanged seven people on security charges unrelated to the election but seen as a warning to opposition groups.

Earlier this month, leaders of the pro-democracy Green Movement that sprouted after the election called off a June 12 rally on the first anniversary of the election, saying they feared for the safety of protesters.

“Despite the wealth of video-taped evidence and witnesses, the Iranian authorities have not carried out any independent investigation into Neda’s death, nor the apparent deaths of scores of others at the hands of government forces between June and December 2009,” Amnesty said.

“They have denied allegations that the paramilitary Basij caused Neda’s death and blamed, instead, a range of people and organisations including the BBC, CNN, the CIA, and even the doctor who rushed to Neda’s aid when she was shot,” the rights group said.

“The government’s response to Neda’s killing has been a cynical face-saving exercise,” said Sahraoui.

“It is all too typical of the wider failure of the Iranian authorities to observe the rule of law, and to ensure accountability for the crimes that continue to be committed in its name,” she added.

Amnesty also called for UN human rights experts to be allowed into Iran.

It said that despite a standing invitation issued by the government to the United Nations, no UN human rights visits have been allowed in since 2005. At least five requests to visit made by UN human rights experts have remained unanswered, Amnesty said.

“The authorities should know that their attempts to brush away the evidence pointing to their responsibility will not silence Iranians, who continue to demand truth and justice for the deaths of Neda and many others,” Sahraoui said.

AP: Iranian newspapers warn that a new wave of...

UPI: The deadline for the construction of the second...