AFP: Oil giant BP has not renewed a contract to supply Iranian airlines with fuel, the Financial Times Deutschland reported in its Tuesday edition. 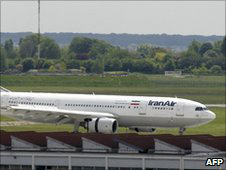 BERLIN, July 5, 2010 (AFP) – Oil giant BP has not renewed a contract to supply Iranian airlines with fuel, the Financial Times Deutschland reported in its Tuesday edition.

The report, in the German-language edition of the financial daily, could explain a statement by an Iranian official Monday that Britain, Germany and the United Arab Emirates had started to refuse to refuel its passenger planes.

The contract had expired at the end of June, the FT Deutschland reported, and its ending was already having an effect.

It cited an incident in which an Iran Air plane had to land in Vienna because it had been refused a refuelling at Hamburg airport in northern Germany.
“We won’t comment on individual contracts with every airline,” BP told the daily.

“But we respect, in all the countries where we operate, the local rules regarding sanctions.”

Fresh sanctions against Iran voted by the United Nations had influenced their decision, said the company.

French group Total at the German airport of Cologne-Bonn, and Kuwaiti group Q8 both told the paper that they were supplying fuel as normal.

While an Iranian official said Monday that airports in Britain, Germany and the United Arab Emirates had started to refuse to refuel passenger planes from Iran, the reports were denied in all three countries.

On June 9, the UN Security Council imposed a fourth set of sanctions against Iran over its nuclear programme, followed by unilateral punitive measures by the European Union and later by the United States.

The US measures include moves to choke off Iran’s access to imports of refined petroleum products such as gasoline and jet fuel.

World powers led by Washington suspect Tehran is making nuclear weapons under the guise of a civilian atomic programme. Iran says its nuclear programme is purely for peaceful purposes.

Beginning of the end?

Washington Times: This time the violence is more serious....

Fox News: While controversy raged about chemical weapons in...