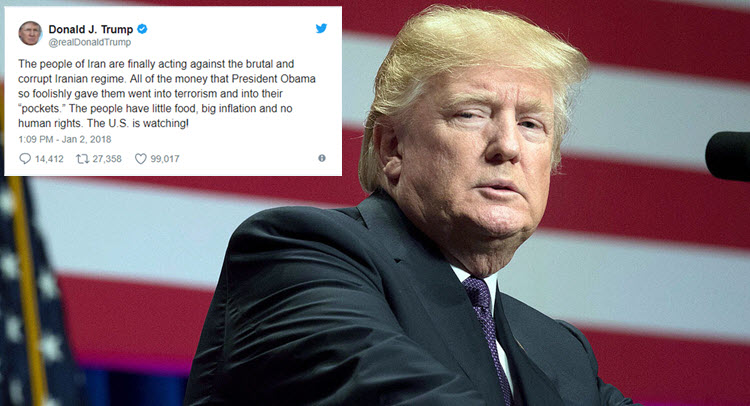 London, 3 Jan – Donald Trump has praised the Iranian people for standing up against the brutal mullahs that head the Regime and cited that the money that Iran got as a result of the nuclear deal has been used to fund terrorism and expansionism, rather than to benefit their own people.

The spending of this money on the export of terrorism and wars via proxy groups is part of the reasons for the protests.

On January 2, Trump tweeted: “The people of Iran are finally acting against the brutal and corrupt Iranian regime. All of the money that President Obama so foolishly gave them went into terrorism and into their ‘pockets.’ The people have little food, big inflation and no human rights. The U.S. is watching!”

While Trump was voicing his support for the protesters, his administration was making further moves to isolate the Regime, including new sanctions that will be enacted if the Regime attempts to end the demonstrations via force.

These sanctions relate to human rights violations, such as using violence against peaceful protesters.

White House Counselor Kellyanne Conway said: “The world needs to see what’s happening in Iran right now. That’s what freedom looks like. [Trump] doesn’t want to remain silent, as too many people were silent in 2009.”

Indeed, these protests are much larger than the rallies of 2009, where many gathered in Tehran to protest the rigged re-election of then-President Mahmoud Ahmadinejad. Unfortunately, the US ignored the cries of the Iranian people then and many protesters were imprisoned and some even killed. That cannot happen again.

The death toll from these protests is currently more thag 20, and Trump is not prepared to back down. He has been clashing with Iranian President Hassan Rouhani over the protests for days now and criticising the Obama administration for the Iranian nuclear deal that provided the Regime with the cash to spend on terrorism by unfreezing more than $100 billion in Iranian assets and making cash payments of over $1 billion to release US hostages.

On Monday, he tweeted: “Iran is failing at every level despite the terrible deal made with them by the Obama Administration. The great Iranian people have been repressed for many years. They are hungry for food & for freedom.

Along with human rights, the wealth of Iran is being looted. TIME FOR CHANGE!”

Israeli Prime Minister Benjamin Netanyahu also confirmed his support for the protesters via Twitter. He said: “I wish the Iranian people success in their noble quest for freedom.”

Meanwhile, the Iranian Regime has shown that they are so scared of the protesters that they plan to use force against them in leaked notes from a meeting between Supreme Leader Ayatollah Ali Khamenei, political leaders, and heads of the country’s security forces.

The notes, leaked by the National Council of Resistance of Iran (NCRI) who have operatives inside the Regime, say that the protests are damaging the economy and threatening the Regime’s security. They call one group of protesters, the People’s Mujahedin of Iran (MEK), “Hypocrites” and state that the “infidels” (The West) are supporting them.

The Regime has also blocked access to Instagram and Telegram; apps that the activists are using to organise demonstrations and communicate.

Roughly 450 protesters have been arrested in Tehran alone over the past three days, according to the semi-official ILNA news agency. Nationwide arrest figures have not yet been released.

Musa Ghazanfarabadi, the head of Tehran’s Revolutionary Court, warned that protesters who are arrested could face the death penalty.

AFP: Three Iranian government ministers are on a list...