Iran footballer sacked for ‘not fasting in Ramadan’

AFP: Popular Iranian footballer Ali Karimi, sometimes described as “the Maradona of Asia,” has been fired by his club for not fasting during the Muslim holy month of Ramadan, the club said on Sunday. 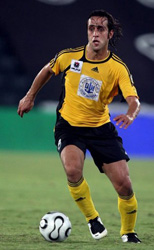 TEHRAN (AFP) — Popular Iranian footballer Ali Karimi, sometimes described as “the Maradona of Asia,” has been fired by his club for not fasting during the Muslim holy month of Ramadan, the club said on Sunday.

Steel Azin FC said on its website www.steelazin.com that it was “forced to sack one of its players, Ali Karimi, for being disobedient and not fasting during Ramadan,” when devout Muslims fast from dawn until dusk.

Karimi, who was the Asian Player of 2004, had even “insulted officials of the (Iranian) football federation and the Tehran team’s supervisor who confronted him on the issue,” Steel Azin said.

His sacking comes after he criticized in an interview on his website the management style of the club’s managing director and former official of Iran’s Revolutionary Guards, Mostafa Ajorlou.

The Islamic republic’s state news agency IRNA, meanwhile, reported that the club’s chairman, Hossein Hedayati, was unaware of the decision and was against Karimi’s sacking.

Karimi, 31, who has been dubbed by some Iranian commentators as Maradona of Asia, is the second most capped player and the third highest scorer for the Iranian national team.

He also had a two-year stint in the Bundesliga, scoring four goals in 50 appearances for Bayern Munich.

Ramadan started in Iran on Thursday and under Iranian laws, all Muslims are required to observe the holy month, while those who do not fast, including non-Muslims, are expected to abstain from eating or drinking in public.

Muslims observe Ramadan by abstaining from food, drink and sex from dawn until sunset. Pregnant and menstruating women, the sick, travellers and pre-pubescent children are exempt from the fast.

IMF to assess Iran economy in next six months

Reuters: The International Monetary Fund will visit Iran in...