The future of Iran is waiting for our support

Sunday Telegraph: Why have we in the West persecuted exactly those groups that Tehran wants us to, asks Christopher Booker

Why have we in the West persecuted exactly those groups that Tehran wants us to, asks Christopher Booker 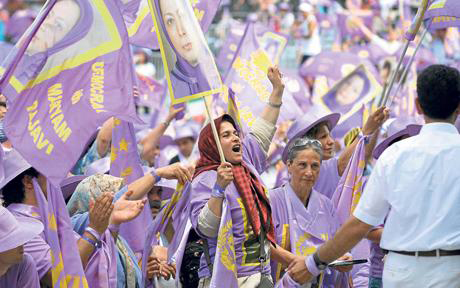 There was extensive coverage last week for the charge by the First Vice President of Iran that we are “a thick people ruled by a mafia”, and also for the woman who was threatened with death by stoning for adultery. Less attention has been paid to a more complex drama involving that unhappy country – one that helps to explain why one of its senior politicians would launch such abuse against Britain and “the young lad now in charge” who is “even stupider than his predecessor”.

In recent months the regime in Tehran has stepped up the reign of terror it has imposed ever since last year’s nationwide demonstrations against the rigged elections which confirmed Mr Ahmedinajad as president. Thousands of people have been thrown into Iran’s infamous prisons and scores hanged, many in public. The regime has focused its propaganda – rather like the “Goldstein-hate” in Nineteen Eighty-Four – against the country’s main opposition group, the National Council of Resistance in Iran (NCRI), led in Parisian exile by Mrs Maryam Rajavi, and its largest component, the People’s Mujahideen of Iran (PMOI), seven of whose members are now awaiting a much-publicised death by hanging.

For nearly a decade the West has been alarmed by Iran’s plans to develop nuclear weapons – on which Western governments were kept informed by the PMOI from its contacts inside the country. But Tehran made it a condition of any negotiations that the West must ban the PMOI as terrorists. The US was first to sign up, followed by Jack Straw for the UK in 2001 and the EU in 2002. Tehran could then tell its own people that even Westerners recognised the PMOI as terrorists – even while Tehran itself was actively supporting terror across the Middle East, from Gaza to Iraq.

However, in a startling series of legal actions, as I have reported over the years, both the UK and the EU tried to defy rulings from their own courts that the bans must be lifted, on the grounds that the governments could produce no evidence that the PMOI were terrorists. Our Home Office was forced to back down after a trenchant judgment by Lord Chief Justice Phillips, and after the PMOI had won support from over 100 MPs and peers, including a former Tory home secretary and several other ex-ministers.

This left the US on the spot. It was alone in retaining its ban on the PMOI (despite mounting unrest in Congress), yet it stood as legal protector to 3,400 PMOI members living in exile in Camp Ashraf in Iraq. In 2003 they had handed over their weapons in return for individual guarantees of safety given by the US occupying forces.

Now all this is coming to a head. Last summer Iranian sympathisers at the top of the Iraqi government organised an attack on Ashraf, killing 11 people. They have continued to lay siege to the settlement, preparatory to handing over its inhabitants to their Iranian enemies. Now that US forces are pulling out, those left in Ashraf fear the worst, which would make a mockery of those US guarantees of their safety. Meanwhile last month a senior Washington court ruled that Hillary Clinton, as Secretary of State, should consider lifting the US ban on the PMOI, on the same grounds that had persuaded the courts in the UK and Europe.

Last week Mrs Clinton issued a strong protest at the imminent hanging of the seven PMOI members in Iran. (The only charge against one of them is that his son is in Ashraf.) Thus have all those efforts at appeasement over the years begun to unravel. They have got nowhere in persuading Tehran to desist from its nuclear ambitions. And the mullahs’ dictatorship has turned more ruthlessly than at any time since the 1980s – when it murdered some 120,000 supporters of the PMOI – on a people who are visibly ready, with shouts of “Death to the dictator” and lately “Are you with us, Obama, or against us?”, to rise in revolution – if only they knew how.

All this adds up to as dismal a failure of Western diplomacy as any in recent decades. Instead of futile efforts to placate a monstrous regime – which in return has done all it could to spread terrorism throughout the region and contributed to the deaths of hundreds of Western soldiers in Iraq – our governments might instead have recognised that their true interest lay in working with the NCRI and the PMOI. These were recently supported by 100,000 Iranian exiles in a demonstration in Paris, and by 3,500 parliamentarians from all over Europe.

If the good of mankind would best be served by replacing the theocratic tyranny in Tehran with a secular democracy, then those best placed to provide such an outcome are there, waiting for us to support them.

Enrichment ‘not a step towards a bomb’: Ahmadinejad

AFP: Iran's enrichment of uranium to 20 percent "is...