Iran says to unveil array of weapons next week

AFP: Defence Minister Ahmad Vahidi said on Tuesday that Iran will unveil next week an array of weapons, including missiles, speedboats and a long range drone, the ISNA news agency reported. 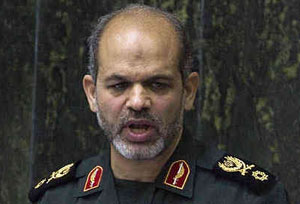 TEHRAN, August 17, 2010 (AFP) – Defence Minister Ahmad Vahidi said on Tuesday that Iran will unveil next week an array of weapons, including missiles, speedboats and a long range drone, the ISNA news agency reported.

Two missiles, Qiam (Rising) and the third generation Fateh 110 (Conqueror) would be tested next week when Iran marks the annual government week, Vahidi said in reference to the Iranian week which starts on Saturday.

On Sunday Iran launches its annual government week which runs until August 30 and is an occasion to showcase Tehran’s achievements.

Iran has previously paraded a version of Fateh 110 which has a travel range of 150 to 200 kilometres (90 to 125 miles), but the range of the surface-to-surface Qiam missile was not reported by ISNA on Tuesday.

Vahidi said the unveiling of these weapons indicate that “sanctions have had no impact on us, but made us more experienced and self-sufficient.”

Tehran’s archfoes, the United States and Israel have not ruled out a military strike against Iran to stop its controversial nuclear programme.

Last week a top commander from the Revolutionary Guards said Iran will mass produce replicas of the Bladerunner 51, often described as the world’s fastest boat, and equip them with weapons to be deployed in the Gulf.

Also on August 8, Iran took delivery of four new mini-submarines of the home-produced Ghadir class. Weighing 120 tonnes, the “stealth” submarines are aimed at operations in shallow waters, notably in the Gulf.

AP: As Iran appears to move closer to resuming...