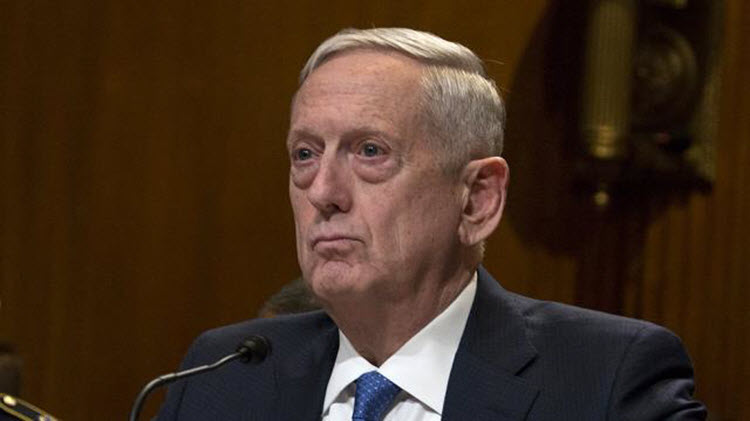 London, 14 Oct – On Friday, Defense Secretary James Mattis said he supports President Trump’s newly unveiled strategy regarding Iran, following the president’s announcement of his decision not to certify Tehran’s compliance with the The Joint Comprehensive Plan of Action (JCPOA), known commonly as the Iran nuclear deal, which is an international agreement reached in Vienna in 2015, between Iran and the five permanent members of the United Nations Security Council—China, France, Russia, United Kingdom, United States—plus Germany, (the P5+1).

At the Pentagon, Mattis told reporters, “I give advice to the president. He was elected by the American people and I stand by this Iran strategy as it came out today.”

Along with several other top Trump officials, Mattis appeared to be at odds with the president’s view on the Iran deal prior to the Friday announcement. In fact, earlier in the month the Defense chief said that it was in America’s national security interest to stay in the Iran nuclear deal.

At the White House, however, Trump declared Friday, that Iran “has committed multiple violations of the agreement” and the U.S. “cannot and will not make this certification.”

Still, Trump stopped short of withdrawing from the deal, but vowed to confront Tehran on a number of other issues. Those issues are believed to range from its ballistic-missile tests to its support for groups such as Hezbollah.

According to Mattis, his first priority will now be to confer with allies in the Middle East and elsewhere to gauge views on Iran’s “misbehavior.” By sharing intelligence with allies and partners, the retired Marine Corps general said the U.S. intends to “dissuade” Iran from shipping arms to rebel groups.

Reuters reported that Mattis had said he had not yet seen any provocative actions from Iran, and there had been no change in U.S. military posture following Trump’s speech in which he outlined his plans for the Tehran. Returning from a trip to Florida, Mattis told reporters, “With the Iranians destabilizing record from Lebanon to Syria, from Yemen to Afghanistan, of course we watch for this. Right now we are not changing our posture.”

Additionally, in a statement, The Pentagon said that it is “identifying new areas where we will work with allies to put pressure on the Iranian regime, neutralize its destabilizing influences and constrain its aggressive power projection, particularly its support for terrorist groups and militants.”