AFP: Hardline Iranian President Mahmoud Ahmadinejad dismissed on Wednesday the holding of direct peace talks between Israel and the Palestinians, saying the negotiations will fail to resolve conflict in the Middle East. 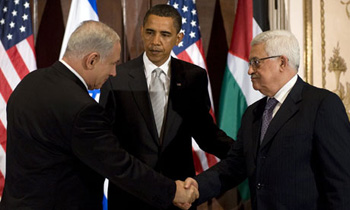 TEHRAN (AFP) — Hardline Iranian President Mahmoud Ahmadinejad dismissed on Wednesday the holding of direct peace talks between Israel and the Palestinians, saying the negotiations will fail to resolve conflict in the Middle East.

“Tens of negotiations have been held in more than 30 years and tens of plans have been proposed, but they have all failed,” Ahmadinejad told Iran’s Arabic-language Al-Alam Television in an interview.

“If the main problems of Palestine are not considered, the fact that two people sit down and talk will resolve nothing,” Ahmadinejad said in comments posted on the website of the channel in Farsi.

“Talks and even signing reconciliation treaties cannot gain legitimacy for the Zionist regime and resolve the Palestinian question.”

Ahmadinejad called for the Islamic movement Hamas which rules the Gaza Strip to be involved in any peace talks as it is “the most official representative of Palestinians because it had the people’s votes.”

“Any negotiations should take place with Palestinians’ representative,” the hardliner added. Hamas is listed by the European Union and the United States as a terror organisation.

Iran has been a staunch supporter of Hamas since the movement won Palestinian legislative elections in 2006, although Tehran says its aid does not extend to military arms and training, as alleged by Israel.

The Iranian president also dismissed Iran’s arch-foe the United States’s role as mediator in the latest round of direct talks.

“Experience shows US governments have absolutely backed the Zionist regime and its crimes … how can they be a mediator in talks?” Ahmadinejad asked.

Iran does not acknowledge Israel, while the Jewish state has not ruled out a military strike to force Tehran to halt its controversial nuclear programme.

Iran regime has no future – dissident

Bloomberg: The U.K. government said it was "utterly confident"...