Reuters: The United States tries to support democratic forces in Iran but in a way that does not undermine or endanger them, U.S. Secretary of State Hillary Clinton said on Wednesday. 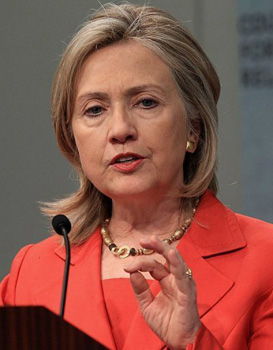 WASHINGTON (Reuters) – The United States tries to support democratic forces in Iran but in a way that does not undermine or endanger them, U.S. Secretary of State Hillary Clinton said on Wednesday.

Speaking to foreign policy experts, Clinton also said she believed the Iranian people eventually will respond to what called a “sad confluence of events” in the oil-exporting nation, including its slide towards what she called a military dictatorship.

Iranian authorities quelled massive anti-government demonstrations in the weeks and months after last year’s disputed presidential voting that re-elected President Mahmoud Ahmadinejad. There have been no major rallies since December, when eight people died in clashes with security forces.

“I don’t think there is any doubt that Iran is morphing into a military dictatorship with a … sort of religious-ideological veneer,” Clinton said in response to questions at the Council on Foreign Relations, echoing a phrase she first used in public in February.

“I don’t think that’s what the Iranian Revolution for a republic of Iran, an Islamic republic of Iran, was ever meant to become,” she said. “So I know there is a great deal of ferment and activities inside that we do try to support.

“At the same time, we don’t want to either endanger or undermine those very same people so that it becomes, you know, once again, the U.S. doing something instead of the U.S. being supportive of what indigenous efforts are taking place.

“There is a very … sad confluence of events occurring inside Iran that I think eventually — but I can’t put a time frame on it — the Iranian people themselves will respond to,” she said. “We want to be helpful but we don’t want to get in the way of it so that’s the balance that we try to strike.”

The United States has had a vexed relationship with Tehran since the 1979 Islamic revolution toppled the shah of Iran, a close U.S. ally who had been restored to power through a U.S.-backed 1953 coup.

U.S. officials accuse Iran of seeking to develop nuclear weapons under cover of its civilian atomic energy program and of supporting groups including Hamas in the Gaza Strip and Hezbollah in Lebanon.

Iran says its nuclear program is to generate electricity so that it can export more of its valuable oil and gas.

On Monday, an International Atomic Energy Agency report said Iran was pushing ahead with its nuclear program in defiance of tougher sanctions and is hampering the Vienna-based U.N. nuclear watchdog’s work by barring some inspectors.

The Iran Policy Committee, a Washington-based nonprofit group that has close ties to Iranian exiles and seeks to influence U.S. policy towards Iran, said it would hold a news conference in Washington on Thursday to present intelligence about a “new major secret nuclear site” in Iran.

The group’s claim could not be immediately verified.

The eight-year international dispute over Iran’s nuclear activities has the potential to set off a regional arms race and spark a conflict in the Middle East.

The West hopes the imposition since June of fresh U.N., U.S. and European sanctions on Iran — including measures that target its lifeblood oil and gas sectors — will persuade the Iranian leadership to back down and halt sensitive activity.

Iran repeatedly has rejected such demands and is sending mixed signals about its readiness to negotiate with the West, offering unconditional talks on a stalled plan to swap nuclear fuel but setting terms for any broader discussions.

By Jubin Katiraie On March 11, the organizing committee of...