AP: Iran’s envoy to the United Nations has confirmed that a female American held for more than a year will be released. 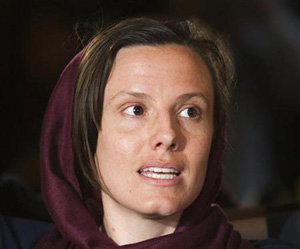 TEHRAN, Iran (AP) — Iran’s envoy to the United Nations has confirmed that a female American held for more than a year will be released.

Iran had earlier announced that one of the three Americans captured by Iran in July 2009 would be released to mark the holidays at the end of the Islamic holy month of Ramadan.

Bak Sahraei, second counselor of the UN mission confirmed Thursday in an e-mail that Sarah Shourd would be the one set free on Saturday.

THIS IS A BREAKING NEWS UPDATE. Check back soon for further information. AP’s earlier story is below.

TEHRAN, Iran (AP) — Iran said Thursday it will free one of three Americans jailed for more than 13 months as an act of clemency to mark the end of the Islamic holy month of Ramadan.

The imprisonment of the Americans has deepened tensions between the U.S. and Iran, a relationship already strained over Washington’s suspicions that Tehran is trying to manufacture nuclear weapons — something Iran denies.

The Culture Ministry sent a text message to reporters telling them to come to a Tehran hotel on Saturday morning to witness the release. The site is the same one where the three were allowed the only meeting with their mothers since they were detained in July 2009.

Iran claims they illegally crossed the border from Iraq’s northern Kurdish region and had threatened to put the three on trial for spying. Their families say they were hiking in the largely peaceful region of Iraq and that if they crossed the border, it was accidental.

“Offering congratulations on Eid al-Fitr,” the ministry text message said, referring to the feast that marks the end of Ramadan.

“The release of one of the detained Americans will be Saturday at 9 a.m. at the Estaghlal hotel.”

The Iranian message gave no other details about who would be freed. But Sarah Shourd, 31, has told her mother she has serious medical problems. Shane Bauer, 27, and Josh Fattal, 27, also are being held.

The gesture could be a calculated move by Iran to soften international criticism of its judiciary. Iran has faced a growing storm of protest over a stoning sentence for a woman convicted of adultery that has been temporarily suspended.

Iranian President Mahmoud Ahmadinejad has in the past proposed swapping the three for Iranians he says are jailed in the U.S., raising fears that the Americans are being held as bargaining chips.

Releasing prisoners and showing clemency is a common practice in the Muslim world during the fasting month of Ramadan. Iran’s official IRNA news agency said Supreme Leader Ayatollah Ali Khamenei has already pardoned a group of prisoners for Eid al-Fitr. The report gave no number of the freed inmates and did not say whether they also included the American.

The mother of the detained American woman, Nora Shourd, said her daughter told her in a telephone call in August that prison officials have denied her requests for medical treatment. The mother said they talked about her daughter’s medical problems, including a breast lump and precancerous cervical cells, and her solitary confinement in Tehran’s Evin prison.

During the American hostage crisis in 1979-1981, Iran first released women and African-Americans as a sign of respect for women and mercy toward minorities.

“We don’t know, frankly, what Iran is contemplating at this point,” Toner said. “If this turns out to be true, this is terrific news. The hikers’ release is long overdue.”

A statement by Samantha Topping, a New York-based spokeswoman for the three mothers, said they are “urgently seeking further information.”

“We hope and pray that the reports are true and that this signals the end of all three of our children’s long and difficult detention,” the statement said. “Shane, Sarah and Josh are all innocent and we continue to call for their immediate release, so that they can return home together and be reunited with our families.”

Iranian leaders have repeatedly suggested a link between the jailing of the Americans and Iranians they claim are held by the United States.

The Swiss embassy in Tehran has handled consular affairs for the United States for about 30 years, since after 1979 Iranian revolution. Swiss diplomats refused to comment Thursday on any possible release of the three detained Americans but are expected to be involved in any transfer.

Once the American is released, normal protocol would be to turn the person over to Swiss diplomats to be taken to the embassy.

There are direct commercial flights to Geneva a few times a week. While flights to Dubai, such as the one taken by the Americans’ mothers, are much more frequent, they are probably all booked because of the holidays.

If the released American requires medical care, Geneva would also be the more attractive option.

Ali Reza Shiravi, the head of Iran’s foreign media office at the Culture Ministry, confirmed that he had sent the message summoning reporters to the hotel.

The high-rise Estaghlal hotel near Evin prison is where the three Americans’ mothers were allowed to visit them in May in a highly publicized trip.

Iran’s president has in the past suggested the Americans could be traded for Iranians claimed to be held by the U.S.

Iran in December released a list of 11 Iranians it says are being held in the U.S. They included a nuclear scientist, Shahram Amiri, who disappeared in Saudi Arabia but has since returned to Iran.

Also on the list were a former Defense Ministry official who vanished in Turkey and an Iranian arrested in Canada on charges of trying to obtain nuclear technology. Three of those on the list have been convicted or charged in public court proceedings in the United States. The circumstances surrounding some of the others are more mysterious.

Ali Reza Asgari, a retired general in the elite Revolutionary Guard and a former deputy defense minister, disappeared while on a private trip to Turkey in December 2006.

The list also includes three Iranians who Tehran claims were abducted in Europe and sent to the U.S.: merchant Mohsen Afrasiabi, who it says disappeared in Germany, as well as electrical engineering student Majid Kakavand and a former ambassador to Jordan, Nasrollah Tajik, who it says vanished in France.

French media have reported that Kakavand was arrested in March at the request of the U.S. on suspicion he obtained electronic equipment. He was jailed, then moved to house arrest on Aug. 27. The French press has reported that Tajik went missing in Britain.

Three of the Iranians Tehran is asking about have faced public legal proceedings in the U.S.

One of them, Baktash Fattahi, is a legal U.S. resident. He was arrested in April in California and charged with conspiracy to export American-made military aircraft parts to Iran.

Another, Amir Amirnazmi, is a dual U.S.-Iranian citizen who was convicted by a court in Pennsylvania in February of business dealings with Iranian companies banned under U.S. sanctions imposed over Iran’s disputed nuclear program.

Amir Hossein Ardebili was sentenced to five years in prison on Dec. 14 by a court in Wilmington, Delaware, after pleading guilty to plotting to ship U.S. military technology to Iran.

Iran has called it a show trial and said Ardebili was abducted in the former Soviet republic of Georgia in 2007 before being handed over to U.S. authorities in 2008.

One of the other Iranians, Mahmoud Yadegari, was arrested in April in Canada after a joint investigation with the U.S. Department of Homeland Security and charged with trying to send nuclear technology to his native Iran.

Authorities allege Yadegari tried to procure and export pressure transducers, which can be used in the production of enriched uranium but also have many legitimate commercial uses. Iran is under international sanctions for its refusal to halt uranium enrichment, a process that can be used to manufacture nuclear weapons.

The other two Iranians on the list are Amir-Shahrzad Amir-Qolikhani and Hassan Saeid Kashari. Iran gave no information about them other than to say they are being held in the U.S. without charge.

Associated Press Writers Patrick Condon in Minneapolis and Matthew Lee in Washington contributed to this report.

US raps Iran on Syria after Tehran conference

AFP: The United States on Thursday dismissed a 29...