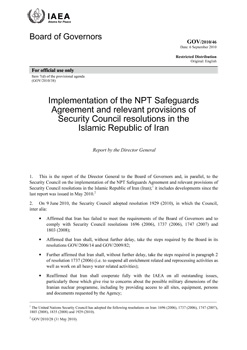 The good news is that many countries are finally waking up to the danger. In the three months since the United Nations Security Council adopted its latest round of sanctions, a growing number is turning up the heat on Tehran, implementing the United Nations penalties and, in some cases, going beyond them.

The United States, the European Union, Canada and Australia have approved national sanctions that aim to choke off Iran’s access to foreign capital, halt investment in its energy sector and impede its shipping industry.

In recent days, Japan barred all transactions with 15 Iranian banks, the United Arab Emirates froze four Iranian bank accounts and South Korea announced plans to restrict foreign exchange transactions for 126 Iranian companies and individuals — including the only Asian branch of Bank Mellat, one of Iran’s largest banks. The sanctioned accounts, institutions and individuals are all associated with Iran’s nuclear or missile programs.

The Obama administration, which has been pressing allies and others to take a much tougher line, went even further on Tuesday, sanctioning an Iranian-owned bank in Germany, the European-Iranian Trade Bank, or E.I.H. Bank, which is accused of facilitating billions of dollars of transactions for blacklisted Iranian companies. The move effectively shuts E.I.H. out of the American financial system.

Iran’s government — so far at least — remains defiant. According to the latest report by the International Atomic Energy Agency, Iranian scientists are continuing their slow but steady production of low-enriched uranium and now have 6,108 pounds, up 15 percent from June. With further enrichment, that would be enough fuel for about two nuclear weapons.

Tehran has a long and cynical history of hiding nuclear facilities — including its main enrichment site at Natanz and more recently discovered enrichment facility at Qum. If that isn’t enough, an Iranian dissident group on Thursday said it has found evidence of yet another secret nuclear site. And Iran is still refusing to fully cooperate with inspections by the atomic energy agency. For the past two years, Iran has barred two of the agency’s most experienced monitors. The report also says Iran is continuing to refuse to answer questions about whether it is hiding other facilities and whether its program has military uses, including a suspected project to fit a nuclear warhead on a missile.

American officials say said the new sanctions are beginning to bite — choking Iran’s access to foreign capital, trade and investments. If there is any chance of changing Tehran’s behavior, it is clearly going to take more pressure and more time.

Countries that have adopted sanctions already need to implement them robustly. We are sure that the United Arab Emirates, a major hub for Iranian business activity, can find more than four accounts to freeze. Countries that for political or economic reasons are still enabling Iran — China comes immediately to mind — need to read that I.A.E.A. report again.

Tehran, predictably, insists it is not building a weapon. Its refusal to halt enrichment and cooperate with the I.A.E.A. makes that ever more impossible to believe.

Iran seen to rank students and housewives as employed

Reuters: Counting students and housewives among the ranks of...

Washington Post: Ever since European seaports closed their gates...