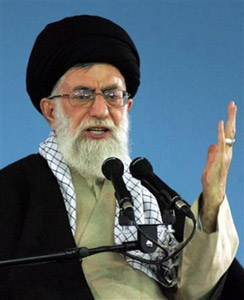 The speech appeared to be part of an effort by Iran’s hard-line leaders to amplify Muslim outrage over scattered gestures to burn or tear pages of the Koran, in the wake of the threat — later withdrawn — by Terry Jones, a Florida pastor, to burn the Koran on the anniversary of the Sept. 11 terrorist attacks.

In Tehran, about 1,000 protesters chanting “Death to America” and “U.S. pastor must be killed” clashed with the police and threw stones at the Swiss Embassy, Reuters reported. The Swiss have handled American interests in Iran ever since the United States severed diplomatic relations with Tehran after the 1979 Islamic Revolution.

In his speech, Ayatollah Khamenei said “the leaders of the global arrogance” — a code for the United States among Iranian conservatives — had engineered the plot to desecrate the Koran, Press TV and other agencies reported. He added that “Zionist think tanks which hold the most influence in the United States government and its security and military organizations” were also involved.

Ayatollah Khamenei warned people not to believe that isolated right-wing American Christians were to blame, calling them “puppets” of the government. “This incident and previous incidents clearly show that what the global arrogance is attacking today is the foundation of Islam and the Holy Koran,” he said.

Also on Monday, an Iranian official said that the judiciary had opened proceedings against “the leaders of sedition,” a phrase often used to describe the opposition leaders Mir Hussein Moussavi and Mehdi Karroubi, according to Fars News, which has links to Iran’s military.

Although the street protests faded earlier this year, Mr. Moussavi and Mr. Karroubi, who were candidates in the 2009 election, have continued to maintain that President Mahmoud Ahmadinejad’s landslide victory was achieved through fraud, and they regularly criticize the government and encourage opposition. Both men have faced increased restrictions recently, and groups of rock-throwing young hard-liners attacked Mr. Karroubi’s house earlier this month as the police stood by.

Working in Iran’s Mines Comes at the Price of Death

By Jubin Katiraie Working in Iran’s mines is a...