AP: An American woman who was held in Iran for more than 13 months and accused of espionage said Sunday she and two men detained with her never spied or committed any crime, calling their arrest “a huge misunderstanding.” 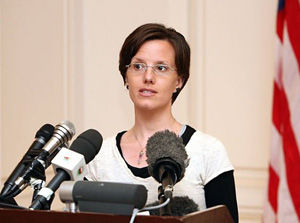 NEW YORK (AP) — An American woman who was held in Iran for more than 13 months and accused of espionage said Sunday she and two men detained with her never spied or committed any crime, calling their arrest “a huge misunderstanding.”

Discussing her experience for the first time since her release Tuesday, Sarah Shourd underscored her gratitude at being released but said she felt only “one-third free” because her fiance, Shane Bauer, and their friend Josh Fattal remain in Tehran’s notorious Evin Prison.

“This is not the time to celebrate,” Shourd, 32, said in prepared remarks for a New York news conference. “The only thing that enabled me to cross the gulf from prison to freedom alone was the knowledge that Shane and Josh wanted with all their hearts for my suffering to end.”

Meanwhile, Iranian President Mahmoud Ahmadinejad arrived in New York to attend the U.N. General Assembly. He later met with U.N. Secretary-General Ban Ki-moon to discuss developments in Iraq, Afghanistan and the Middle East as well as efforts to resolve the dispute over Iran’s nuclear program, the U.N. spokesperson’s office said.

He called Shourd’s release “a huge humanitarian gesture” in an interview on “This Week with Christiane Amanpour.” He called on the U.S. to release eight Iranians being detained after arrests he said were illegal.

Shourd thanked Iranians and Ahmadinejad in a carefully scripted return that spoke to the continuing delicacy of her situation. Iran has issued espionage-related indictments against her, Bauer and Fattal; the indictments could bring trials for the two men and proceedings in absentia for Shourd.

But she stressed their innocence in a case that has added to the roster of tensions between the U.S. and Iran.

The three were detained in July 2009 after Iranian officials said they intentionally crossed the country’s border from Iraq. Echoing accounts their families have given in their absence, Shourd said Sunday that the three had been hiking in a popular tourist area — near a waterfall in Iraq’s Kurdistan region — and had no idea the border was nearby.

“If we were indeed near the Iraq-Iran border, that border was entirely unmarked and indistinguishable,” she said.

“Shane and Josh do not deserve to be in prison one day longer than I was,” she said. “We committed no crime and we are not spies. We in no way intended any harm to the Iranian government or its people and believe a huge misunderstanding led to our arrest and prolonged detention.”

Shourd’s mother has said she had health problems including a breast lump and precancerous cervical cells. Shourd said Sunday that doctors in Oman, where she went immediately after her release, had determined she was physically well.

Officials in Oman — an ally of both Iran and the United States — mediated a $500,000 bail for Shourd that satisfied Iranian authorities and apparently did not violate U.S. economic sanctions against Iran. The source of the bail payment has not been disclosed.

Shourd and Bauer had been living together in Damascus, Syria, where Bauer was working as a freelance journalist and Shourd as an English teacher. Fattal, an environmental activist and a fellow graduate of the University of California at Berkeley, came to visit them last July, and the three went hiking.

“My hope is that by learning who we are and how we came to be in this diverse and fascinating region of the world directly from my lips, it will help clear up any doubts and end Shane and Josh’s detention,” Shourd said.

She added that she hoped their experience would provide “an opportunity for Americans and Iranians to realize that an improved relationship would be in the best interest of all people.”

Ahmadinejad gave no specifics in his interview with Amanpour about whether Bauer and Fattal might also be released, saying “the cases have to be examined.”

AFP: Iranian women have been barred from standing in...