AFP: Iran’s economy is feeling no ill effects from the toughest Western sanctions yet and is in fact benefiting from them, Iranian President Mahmoud Ahmadinejad told American television on Sunday. 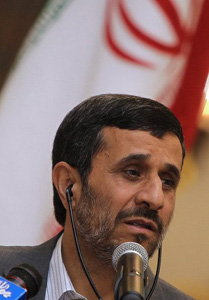 WASHINGTON (AFP) — Iran’s economy is feeling no ill effects from the toughest Western sanctions yet and is in fact benefiting from them, Iranian President Mahmoud Ahmadinejad told American television on Sunday.

“These sanctions will definitively mark a new level of progress in our economy,” Ahmadinejad told ABC News in an interview in New York. “We have turned sanctions around and created opportunities out of this.”

His assessment couldn’t have differed more from that of US Secretary of State Hillary Clinton, who in a separate interview with ABC in Jerusalem praised the measures imposed by the UN Security Council in June as “biting.”

“In fact the information we’re getting is that the Iranian regime is quite worried about the impact on their banking system, on their economic growth because they’ve already encountered some tough economic times. And this is, you know, making it more costly.”

Iran is suspected of planning to build a nuclear weapon, something Tehran strongly denies.

The last high-level meeting between Iran and the six world powers was held in Geneva in October 2009 when the two sides agreed a nuclear fuel swap deal that has since stalled.

“All our nuclear activities are being controlled by cameras,” he said. “Material that is moved is weighed, it’s examined and controlled. So as far as the IAEA supervision is concern, there’s no blockage of that supervision.”

Asked about the “uniform” nature of the sanctions now imposed against Iran, by the United Nations, the United States, the European Union, Japan, South Korea, Russia, even China, Ahmadinejad responded: “It is meaningless to us.”

“We do take sanctions seriously, but taking it seriously is different from believing that they are effective,” he said.

“We consider this and have recorded it as a serious violation of international law. It was illegal. It was wrong. It wronged the people of Iran by insulting them.”

Pushed further on the crippling effect the sanctions could have on businessmen trying to trade or on Iran’s vital shipping industry, Ahmadinejad was defiant.

“None of this is a problem,” he said. “I want to stress, it is not a problem. If you want to say it’s effective, why not wait for the next six months or a year to see with your own eyes whether there are effects or not? And I tell you there are none.”

Iran, Pakistan to be at the heart of Rice’s Europe trip

AFP: US Secretary of State Condoleezza Rice begins in...