US delegation walks out of Iran leader’s UN speech 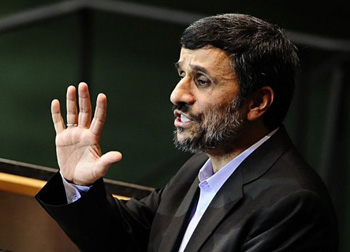 Two US officials, who had been watching the speech, led the protest and the British and other European Union delegations quickly followed after Ahmadinejad said most Americans believed their government was involved in the 2001 attacks.

The Iranian president said there was a theory that “some segments within the US government orchestrated the attack to reverse the declining American economy and its grips on the Middle East in order also to save the Zionist regime.

“The majority of the American people as well as other nations and politicians agree with this view,” he declared to the astonished chamber.

About 3,000 people died in the Al-Qaeda attacks by suicide bombers who hijacked jets and flew them into the World Trade Center in New York, the Pentagon in Washington and a field in Pennsylvania.

The US mission to the United Nations furiously slammed the Iranian leader in a statement released even before Ahmadinejad had finished speaking.

“Rather than representing the aspirations and goodwill of the Iranian people, Mr Ahmadinejad has yet again chosen to spout vile conspiracy theories and anti-Semitic slurs that are as abhorrent and delusional as they are predictable,” said Mark Kornblau, spokesman for the US mission.

The Iranian leader has frequently outraged the United States and other delegations with his speeches at the UN General Assembly.

Last year it was because of his comments about the Holocaust in what the US mission then called “hateful, offensive and anti-Semitic rhetoric.”

Missile may have come from Iran

Daily Telegraph: The Army now believes that the Lynx...