AFP: ThyssenKrupp became on Thursday Germany’s latest corporate giant to announce it was pulling out of Iran as part of Western pressure on the Islamic republic over its nuclear programme. 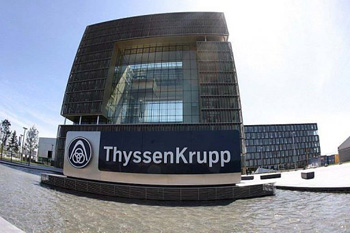 BERLIN (AFP) — ThyssenKrupp became on Thursday Germany’s latest corporate giant to announce it was pulling out of Iran as part of Western pressure on the Islamic republic over its nuclear programme.

Germany’s largest steelmaker said it would not enter into any new contracts with Iranian customers, with immediate effect, going beyond existing international sanctions focused primarily on Iran’s oil and gas sector.

“By halting business with Iran we are supporting the sanctions policies of Germany, the European Union and the United States,” ThyssenKrupp said.

“Existing Group interests in Iran are to be terminated as quickly as possible.

A spokesman for ThyssenKrupp said that the amount of business it did in Iran was “marginal”, representing less than 200 million euros (265 million dollars), or 0.5 percent of annual turnover.

Germany was until recently the world’s biggest exporter, selling 3.7 billion euros worth of goods to Iran alone in 2009. But it has come under pressure for its commercial ties as one of the six powers negotiating with Iran.

At the beginning of the year engineering giant Siemens and insurers Munich Re and Allianz said they were pulling out. Industrial gases firm Linde followed suit earlier this month.

The German government has also reduced to a trickle special export guarantees crucial to firms trading with Iran.

Iran says its nuclear programme is aimed solely at producing electricity but the international community suspects that Washington’s and Israel’s arch enemy wants to arm itself with atomic weapons.

Tehran has signaled a new willingness to engage the international community over its nuclear programme. But so far it has failed to meet the terms for talks, and its defiance triggered new UN Security Council sanctions in June.

Iran says Gulf is no longer safe for U.S.