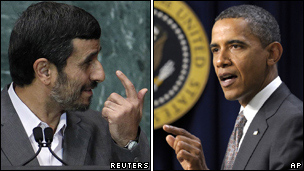 Ahmadinejad sparked outrage in the United States and around the world Thursday as well as a partial walkout in the UN General Assembly chamber when he said that most people believe the US government staged the attacks.

“It was offensive, it was hateful,” Obama said in a television interview that will be broadcast into Iran by the BBC’s Persian service, an excerpt of which was released by the White House.

Obama said it was particularly offensive for Ahmadinejad to make such a statement in Manhattan, just north of the Ground Zero site of the felled twin towers of the World Trade Center.

The president described the site as a place “where families lost their loved ones, people of all faiths, all ethnicities who see this as the seminal tragedy of this generation — for him to make a statement like that was inexcusable.”

About 3,000 people died in the attacks by Al-Qaeda operatives who hijacked jets and flew them into the World Trade Center in New York and the Pentagon in Washington.

A fourth plane, believed to be headed for Washington, crashed short of its target in Pennsylvania.

Ahmadinejad said in his speech that there was a theory that “some segments within the US government orchestrated the attack to reverse the declining American economy and its grips on the Middle East, in order also to save the Zionist regime.

“The majority of the American people as well as other nations and politicians agree with this view,” he declared to the astonished chamber.

White House officials said the remarks were typical of Ahmadinejad’s track record of offensive tirades, but argued that they would only serve to further isolate his government from global opinion.

They said that Obama conducted the interview because he was always looking for ways to reach out to the Iranian people, and said they would blog about the interview, use Twitter to spread it among Iranians and post it on YouTube.

US officials had already detected buzz about the interview among Iran’s new media savvy people, they said.

Despite their anger, Obama aides also said they were committed to pressing for talks with Iran, which is under increasing international pressure from a new range of harsh UN sanctions over its nuclear program.

Hours before Ahmadinejad’s latest outburst, Obama had said in the same UN Security Council chamber that the door remained open to dialogue with the Islamic Republic.

And Ahmadinejad said in a speech that his government was prepared to hold new talks.

“Firstly, Iran has always been ready for a dialogue based on respect and justice. Secondly, methods based on disrespecting nations have long become ineffective,” the Iranian leader said.

In Tehran, the ISNA news agency quoted Ahmadinejad as saying Iran is likely to hold talks with world powers over its nuclear program in October.

Following a meeting in New York on Wednesday, US Secretary of State Hillary Clinton and her counterparts from Britain, China, France, Germany and Russia called for an “early negotiated solution” to the Iranian nuclear issue.

Two diplomats from the P5-plus-1 — the five permanent members of the UN Security Council, plus Germany — said on condition of anonymity that a meeting with Iran could take place this fall in Vienna or in Geneva.