Ahmadinejad sends message to US ‘with Lebanon visit’

AFP: Iranian leader Mahmoud Ahmadinejad’s visit to Lebanon this week sent a message to Washington that Tehran is a key player in the region and cannot be isolated, Lebanese newspapers said on Friday. 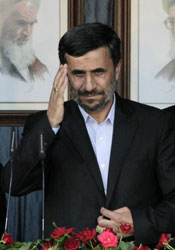 BEIRUT (AFP) – Iranian leader Mahmoud Ahmadinejad’s visit to Lebanon this week sent a message to Washington that Tehran is a key player in the region and cannot be isolated, Lebanese newspapers said on Friday.

“The Americans are being told: ‘If you isolate Iran, Iran will corner you in Lebanon and elsewhere,'” said an editorial in the independent Arabic-language daily Al-Anwar.

“The message is that if Washington wants solutions in the region… it must knock on Iran’s door.”

The United States and its allies have sought to isolate Iran in a bid to force it to halt its nuclear programme, which Tehran insists is for civilian purposes.

Ahmadinejad’s two-day visit to Lebanon, his first since his election in 2005, was widely seen as a boost to key ally Hezbollah, the powerful Shiite militant group that fought a devastating 2006 war with Israel and which is considered a proxy of Iran.

“For the Iranians, their president’s visit is seen within the context of a great power boosting is presence in the region day by day,” said the daily Al-Akhbar, which is close to Hezbollah.

The pan-Arab daily Al-Hayat for its part questioned whether the visit marked a bid by Iran to impose itself as a key player on the Middle East scene.

“Can Iran fill the void left in the Middle East after the ‘suicide’ of the Soviet Union and the US withdrawal from certain regions?” the London-based newspaper asked, alluding to the scaling back of the US military mission in Iraq.

“Is Tehran trying to impose itself as the United States’ primary interlocutor as far as security and stability in the region are concerned?”, it added.

The United States and Israel have condemned the hardline Iranian leader’s visit to Lebanon as a “provocation” and a threat to regional stability.