AP: Iranian Foreign Minister Manouchehr Mottaki said on Friday that Tehran was ready to resume talks about its nuclear program with the international community within a matter of weeks. 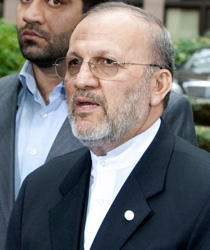 BRUSSELS (AP) — Iranian Foreign Minister Manouchehr Mottaki said on Friday that Tehran was ready to resume talks about its nuclear program with the international community within a matter of weeks.

“From our point of view October or November is a good time for the re-establishment of negotiations,” Mottaki said.

He spoke to reporters as he arrived for a meeting of the so-called Friends of Democratic Pakistan group, which was formed two years ago to support the country’s moves toward democracy. Participants are discussing increased aid to Islamabad in the aftermath of the devastation caused by this summer’s floods.

On Thursday, Catherine Ashton, the EU security and foreign affairs chief suggested the talks on Iran’s nuclear program be held in Vienna “over three days in mid-November,” with the participation of the United States, Britain, China, France, Russia and Germany.

Iran insists it want to enrich uranium only to make fuel for a planned reactor network and denies accusations that it will use the program to make fissile warhead material.

But many in the international community suspect the civilian program is a cover for a military one. So far, the U.N. Security Council has adopted four sets of sanctions meant to pressure Tehran into freezing enrichment.

“The past costly and fruitless trend should be an experience for them — the West — to understand talk of cooperation is the only possible alternative and opportunity for them,” he said according to the television network’s website.

“We have always said talk for cooperation with Iran is the only suitable alternative for (the West),” Jalili was quoted as saying.