Wall Street Journal: The Obama administration dispatched its point man on Iran sanctions to Turkey and Azerbaijan, as the U.S. attempts to further constrict trade flows between Tehran and its closest neighbors.

Washington Seeks to Shore Up Support From Turkey, Azerbaijan.

By JAY SOLOMON And MARC CHAMPION 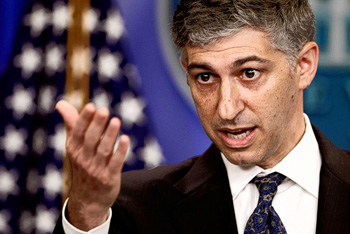 WASHINGTON—The Obama administration dispatched its point man on Iran sanctions to Turkey and Azerbaijan, as the U.S. attempts to further constrict trade flows between Tehran and its closest neighbors.

Stuart Levey, the Treasury Department’s undersecretary for terrorism and financial intelligence, will meet with Turkish and Azeri businessmen and government officials beginning Tuesday in Baku, Azerbaijan, said U.S. officials. Mr. Levey will then travel to Istanbul and Ankara.

“We’re looking to follow up on the steps needed to implement the latest United Nations sanctions against Iran and to share information, especially with the private sector, about threats posed by Iranian illicit conduct,” Mr. Levey said in an interview last week.

Turkey has emerged in recent months as a possible weak link in the growing international campaign to punish Iran financially for its nuclear work.

Prime Minister Recep Tayyip Erdogan pledged in September to triple trade between Turkey and Iran over the next five years, and has committed Ankara to establishing a preferential trade agreement with Tehran.

Energy-rich Azerbaijan, which shares deep ethnic and cultural ties with Iran, could also serve as an important gasoline supplier.

U.S. officials wouldn’t name any of the firms, but they are believed to include a number of major Chinese energy, defense and financial firms.

“We did provide some information to China on specific concerns about individual Chinese companies and the Chinese assured us that they will investigate,” State Department spokesman P.J. Crowley said Monday.

Turkey, which voted against the latest round of sanctions against Iran at the U.N. Security Council in June, has been clear from the get-go that it planned to respect only U.N.-mandated sanctions and would ignore much tougher unilateral sanctions imposed by the U.S. and the European Union.

Turkish Trade Minister Zafer Caglayan this month complained that Turkish banks had been put under pressure to stop doing business with Iran, adding: “We cannot tolerate it.”

Turkish officials say the stance has nothing to do with any nascent Turkish-Iranian alliance or breaking with the U.S., but is simply a function of their belief that sanctions don’t work and that better trade and stable relations with Iran are in Turkey’s national interest.

Iran supplies Turkey with about one-third of its energy needs, with most of the rest coming from Russia.

Meanwhile, legal and illicit trade with Iran is a mainstay for the poor, volatile and mainly ethnic Kurdish areas along Turkey’s 300-mile (500-kilometer)border with Iran.

Turkish politicians of all stripes frequently allude to heavy trade losses Turkey suffered as a result of sanctions imposed on Iraq at the end of the first Gulf War and say they are anxious not to repeat the experience.

In reality, Turkey’s trade with Iran is lopsided—Iranian exports of natural gas to Turkey made up 80% of the $10 billion 2009 total. Meanwhile, the U.S. pressure appears to be having an impact.

Turkish exports to Iran spiked to $325 million in June, the month the sanctions were announced, from $191 million the month before. By August, however, recorded Turkish exports were back down to $198 million.

Bankers said privately that Turkish banks, several of which have U.S. shareholders, have cut back sharply on dealings with Iranian counterparts. A corresponding anecdotal boom in the informal Hawala business, transferring cash between Turkey and Iran, is unlikely to fill the gap, these people say.

Meanwhile, Turkiye Petrol Raifinerileri AS, or Tupras, Turkey’s sole petroleum refiner, said in August it would stop shipping refined products to Iran. That followed a 74% drop in Turkish petroleum exports to Iran in July, according to the Istanbul Exporters’ Association of Chemical Materials.

Azerbaijan is another potential supplier for Iran, with which it has an even more intricate relationship than Ankara—around one quarter of Iran’s population is ethnic Azeri. Annual trade between Iran and Azerbaijan was around the $1 billion mark last year, according to official statistics.

Iranian officials recently called for that sum to increase tenfold. A spokesman for the Azeri trade ministry couldn’t be reached to comment on Monday.

The Obama administration has grown increasingly confident in recent weeks that a U.S.-led financial campaign against Iran is beginning to have a significant impact inside Iran.

Earlier this month, Iranian businessmen described a minirun on the Iranian currency, the rial, which dropped by as much as 20% in two trading days. The businessmen said the run was fueled by fears within Iran’s merchant class that they will be cut off from obtaining U.S. dollars as a result of growing enforcement of U.S. and U.N. sanctions.

Under new U.S. legislation passed in July, foreign companies run the risk of being barred from the American financial system if they are found doing business with 17 blacklisted Iranian banks or the companies of Iran’s elite military unit, the Islamic Revolutionary Guard Corps.

U.S. officials said banks across Europe, the Middle East and Asia have increasingly cut their financial ties to the sanctioned Iranian banks. And major energy suppliers such as Japan’s Inpex Corp., Italy’s Eni SpA and Royal Dutch Shell PLC of the Netherlands, have announced they are ceasing their investments in Iran.

“I’ve never seen something this dramatic as what’s played out in recent weeks” as a result of the sanctions, said a senior U.S. official working on Iran.

By Jubin Katiraie The 25-year deal of China and...