Reuters: A Namibian uranium mine majority-owned by Anglo-Australian mining giant Rio Tinto said it is considering what to do with a stake held by the Iranian government in light of the latest U.N. sanctions. 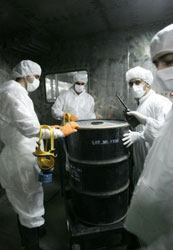 UNITED NATIONS, Oct 18 (Reuters) – A Namibian uranium mine majority-owned by Anglo-Australian mining giant Rio Tinto said it is considering what to do with a stake held by the Iranian government in light of the latest U.N. sanctions.

U.N. Security Council resolution 1929, adopted in June, bans the sale of any stakes in uranium mines to Iran, as well as shares in any commercial operations linked to the production of nuclear materials or technology. It also says that “all states shall prohibit such investment.”

Council diplomats told Reuters that the latest steps clearly ban the sale of new stakes to Iran but are less clear on whether any previously held Iranian stakes in uranium mines or other nuclear-related operations should be divested.

“Rossing Uranium Limited is in consultation with the Government of Namibia to find a solution to deal with the U.N. Resolution requirements and chart the way forward,” Jerome Mutumba, manager for corporate communications and external relations, said in a letter to Reuters dated on Friday.

“The matter is also one of utmost importance to the shareholders of Rossing Uranium Limited, and is the subject of ongoing discussion among them,” Mutumba said in the letter.

Since 1975 Iran has owned a 15 percent stake in the Rossing Uranium Mine in Namibia in southern Africa, one of the world’s biggest open-pit uranium mines. Rossing Uranium Limited sells its uranium to nuclear power plants in North America, Europe and Asia, including Japan.

One Security Council diplomat told Reuters on condition of anonymity that resolution 1929 appeared to apply only to new stakes, although another diplomat said all mining firms would come under pressure to disassociate themselves from Tehran, which is suspected of developing atomic weapons.

Iran insists its nuclear program is entirely peaceful and is intended to meet the nation’s growing power needs. It has been hit with four rounds of U.N. sanctions but refuses to halt uranium enrichment work as demanded by the Security Council.

U.S. officials have been traveling around the world urging governments and major companies to sever ties with Iranian firms to avoid jeopardizing lucrative U.S. business. Western diplomats say the approach has proven to be very effective.

U.S. officials declined to comment on the Rossing mine. Five years ago, when Reuters first revealed the existence of the Iranian ownership stake in the Namibian mine, a U.S. official said the issue was “troubling.”

At that time, Rossing told Reuters that Iranian government representatives routinely attended the mine’s board of directors meetings, but that no shareholders had “product off-take rights” — meaning that Tehran had no inherent right to import uranium from the mine.

Rossing did not say whether or not this was still the case five years later, nor has the firm said whether Iran has ever received milled uranium oxide, better known as “yellowcake,” from the mine in the past.

Yellowcake is not usable in bombs. It must be processed into uranium hexafluoride and then fed into centrifuges for high-speed purification to transform it into weapon fuel — a complicated and time-consuming process.

Reuters: The United States is quietly lobbying to establish...

Iran ran away with the bomb