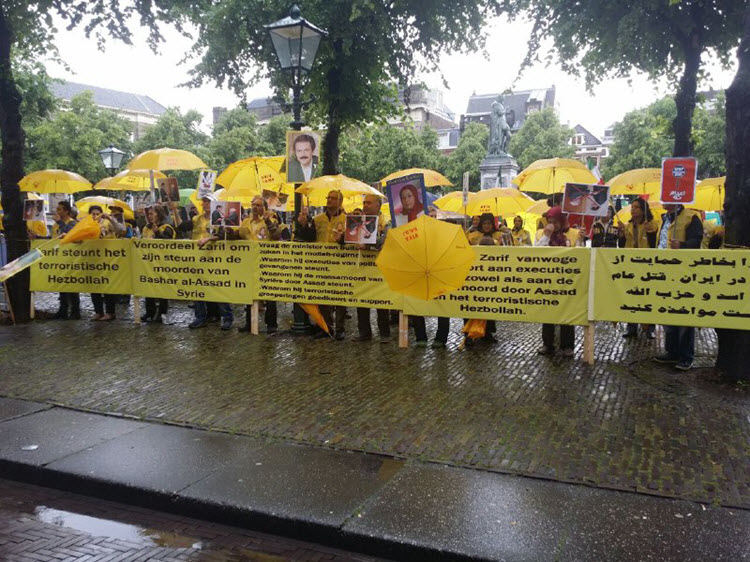 The Hague, 24 Jun – Supporters of the National Council of Resistance of Iran (NCRI) and People’s Mojahedin Organization of Iran (PMOI) gathered at The Hague to protest the visit of the Iranian Regime’s Foreign Minister Javad Zarif.

The protesters asked the Dutch government to condition their relationship with Iran on human rights improvements; citing Iran’s execution rate, its role in the Syrian civil war and its ties to international terrorism.

Despite being portrayed as ‘moderate’ by Western governments during last year’s nuclear deal, Hassan Rohani’s government executed about 1,000 people in 2015 alone. In fact, Amnesty International lists Iran as the state with the highest levels of executions per capita.

The protesters staged mock displays of executions and imprisonment, held up signs and sang chants which described Zarif as a representative of a terrorist regime.
The day before, resistance members gathered in Paris to protest over Zarif’s European trip. These protesters joined the 270 Members of the European Parliament who called on EU countries to pressure the Iranian Regime to improve their human rights situation.

A rally for a Free Iran will be held in Paris on July 9, to expose the horrors of the regime and plead with Western leaders to put an end to the regime’s human rights abuses.

Iranian political prisoner: “I was sentenced in absentia to death..”