AFP: Afghan president Hamid Karzai admitted Monday that his chief of staff had received “bags of money” from Iran but insisted the payment was transparent and a form of aid from a friendly country. 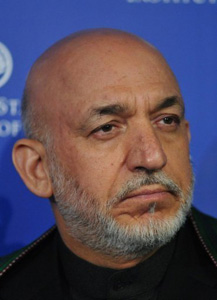 KABUL, October 25, 2010 (AFP) – Afghan president Hamid Karzai admitted Monday that his chief of staff had received “bags of money” from Iran but insisted the payment was transparent and a form of aid from a friendly country.

Cash payments “are done by various friendly countries to help the presidential office and to help the expenses…” said Karzai at a press conference in Kabul.

The New York Times reported Saturday that Karzai’s chief of staff, Umar Daudzai, has been receiving regular cash payments from Iran, which is trying to expand its influence in the presidential palace in Kabul.

“The government of Iran has been assisting us with five or six or seven hundred thousand euros once or twice every year, that is an official aid,” said Karzai.

“He (Daudzai) is receiving the money on my instructions,” he added.

The newspaper, citing unnamed Afghan officials said the payments total millions of dollars and go into a secret fund that Daudzai and Karzai have used to pay Afghan lawmakers, tribal elders and even Taliban commanders to secure their loyalty.

“It’s basically a presidential slush fund,” one Western official is quoted by the paper as saying. “Daudzai’s mission is to advance Iranian interests.”

The Times cited unnamed officials as saying the Iranian payments were intended to secure the allegiance of Daudzai, a former ambassador to Iran who consistently advocates an anti-Western line to Karzai and briefs the Afghan president every morning.

Last August, when Karzai wrapped up an official visit to Iran, Tehran’s ambassador to Afghanistan, Feda Hussein Maliki, brought to the presidential plane a large plastic bag filled with wads of euro bills and handed it to Daudzai, according to the report.

“This is the Iranian money,” the paper quotes an Afghan official as saying. “Many of us noticed this.”

The senior US envoy for Afghanistan and Pakistan, Richard Holbrooke, said last week that Iran had “a role” to play in Afghanistan and welcomed the Islamic republic’s participation in international talks on the situation there held in Rome.