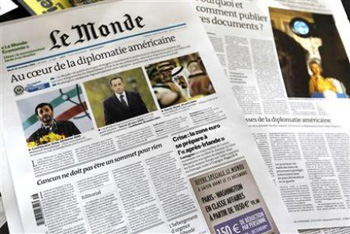 A spokesman for France’s foreign ministry branded WikiLeaks as “irresponsible” for releasing U.S. diplomatic correspondence which he said could “harm the resolution of issues essential for the security and stability of international relations and place at risk people’s safety.”

“We strongly deplore the deliberate and irresponsible disclosure by the WikiLeaks site of American diplomatic correspondence,” the foreign ministry spokesman said.

“We do not confirm any of the points attributed to French authorities and diplomats in these documents,” the spokesman said in response to a question about the reported criticism of Iran and Venezuela.

The Guardian, one of a handful of newspapers allowed access to the documents, reported that the top diplomatic adviser to President Nicolas Sarkozy had told a senior U.S. diplomat in September 2009 that Iran was a “fascist” state and the time had come to decide on further steps.

The newspaper printed the text of a diplomatic telegram which said that Jean-Davide Levitte had described Venezuelan President Hugo Chavez as “crazy” and said: “Unfortunately, Chavez is taking one of Latin America’s richest countries and turning it into another Zimbabwe.”

The foreign ministry spokesman said the disclosure of classified U.S. State Department cables constituted a violation of state sovereignty and of the Vienna convention, which guarantees the secrecy of diplomatic correspondence.

The spokesman said the U.S. administration had warned the French government about the leaks and Paris had offered to work together in response to any repercussions. (Reporting by Daniel Flynn; editing by Mark Heinrich)