US urged to strike Iran opposition from terror list

AFP: Several Bush-era officials on Friday urged the Obama administration to strike an Iranian opposition group from a terrorism blacklist and support regime change in Iran. 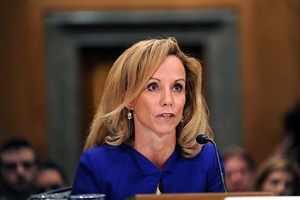 The officials said such an approach is needed because US President Barack Obama’s administration’s policy of engaging Iran will fail to prevent Tehran from acquiring nuclear weapons.

“We should take off the list of terrorist organizations the one group that is devoted to restoring freedom in Iran,” Mukasey, who was attorney general under Bush, told an audience in a Washington hotel.

The PMOI was originally designated by the US State Department as a Foreign Terrorist Organization (FTO) on October 8, 1997 during the administration of president Bill Clinton.

It has been redesignated in subsequent years, including by the George W. Bush administration.

Townsend, who was Homeland Security advisor, said the PMOI should not only be delisted but the terrorism blacklist should be abolished completely because she claimed it is not compiled objectively.

Speakers at the symposium, entitled “Countering Iran’s Nuclear and Terrorist Threats: What are the US Policy Options?,” opted to support the PMOI over advocating military strikes against Iran’s suspect nuclear sites.

“There’s no doubt that a pre-emptive strike would not be a permanent answer,” Bolton said, adding there were too many secret sites to find and hit militarily.

“There has to be a long-term solution, which is replacing the regime in Tehran,” he added. “It should be the declared policy of the United States… to change that regime.”

The PMOI is the right movement to be supported because it “has renounced nuclear weapons unequivocally,” and because it has democratic aims, Bolton said.

Tom Ridge, the former Homeland Security director, said “let’s delist the MEK” and show the world the United States is committed to its own values of freedom.

He said “we’re running out of time” because “terrorist” groups Iran supports — like Hezbollah and Hamas — are getting stronger and Iran’s nuclear program is advancing.

The Islamic Republic denies charges by the West, including the Obama administration, that its nuclear program masks a drive for nuclear weapons, insisting it is for peaceful purposes.

Rouhani has not increased freedoms in Iran, U.N. chief says