CQ: Two top homeland security officials in the George W. Bush adminstration last week criticized the Obama administration’s engagement strategy with Iran, as well as the State Department’s decision to keep the resistance group know as Mujahedin-e Khalq on a list of foreign terrorist organizations since 1997. 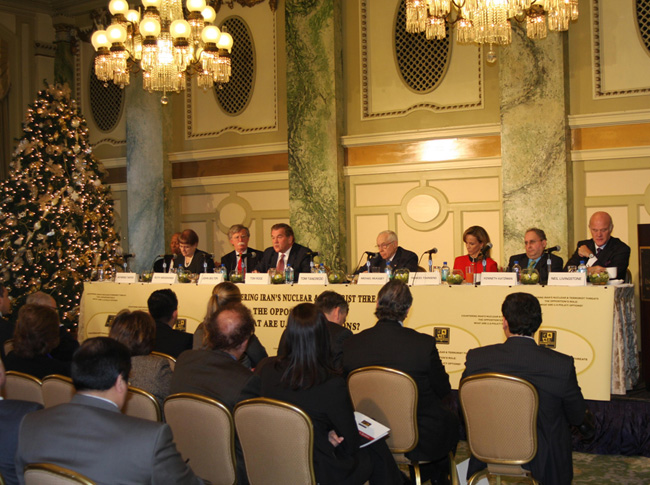 Two top homeland security officials in the George W. Bush adminstration last week criticized the Obama administration’s engagement strategy with Iran, as well as the State Department’s decision to keep the resistance group know as Mujahedin-e Khalq on a list of foreign terrorist organizations since 1997.

Tom Ridge, the first secretary at the Department of Homeland Security, called the administration’s stated policy of willingness to engage Iran well-intentioned, but “perhaps naively optimistic.” Ultimately, attempts at diplomacy haven’t worked, and an increasing number of analysts seem to be accepting the fact that Iran will develop some degree of nuclear weapons capability, Ridge said during a Friday forum exploring the support of resistance groups as a tactic against Iran’s nuclear ambitions, sponsored by the consulting group ExecutiveAction LLC.

“If you think that part of the world is unstable now, you can only imagine it then,” he said.

Frances Fragos Townsend, who served as Bush’s homeland security adviser, said that merely getting Iran to the negotiating table isn’t sufficient as a U.S. policy goal.

She called Iran a state sponsor of terrorism, given its support of the paramilitary group Hezbollah.

Another participant at the forum, John Bolton, the former U.S. ambassador to the United Nations, said the international community will either have to accept a nuclear Iran or some nation will have to take preemptive military action, adding that Israel would be the most likely candidate, given the Obama administration’s “religious faith in the power of negotiation. But Ridge said such intervention is unlikely, as it would further destabilize the region.

Ridge, Townsend and other speakers outlined what they called one step toward thwarting Iran’s nuclear plans – having State de-list the Mujahedin-e Khalq organization (MEK).

In the face of an oppressive regime, the United States should have a policy of actively supporting the opposition, he said, adding that such action could have meaningful results in the nuclear arena.

Operating in exile in Iraq, the MEK has maintained armed camps and was known for launching raids into Iran, although its members signed a nonviolence agreement in 2004. The group was criticized for alleged violent acts within Iraq by human rights groups, but a large contingent of analysts — including the speakers at Friday’s forum — question the legitimacy of those allegations.

The group has a complex relationship with the United States. Although it attacked Americans in Iran in the 1970s, the group has not targeted the U.S. military or civilians in 25 years. In 2003, U.S. forces bombed MEK camps in Iraq, and rounded up thousands of members in custody, only to determine in 2003 that they had no basis for charging them under American law. Despite the MEK’s continued presence on the State Department list, Defense Department officials have said they have used the group to gather intelligence and plant targeting beacons in Iran that could be used for future operations.

Townsend said the State Department added the group to the list under President Bill Clinton in an attempt to appease Tehran, and it has remained there for political reasons.

“The fact that we permit domestic politics and foreign policy concerns to affect what should be an objective process . . . weakens U.S. credibility,” she said.

The former White House officials went even further, saying the entire list has been tainted by politics, and should be abolished.

ExecutiveAction CEO Neil Livingstone said three successive administrations are guilty of keeping the MEK on the list for political reasons.

“The Bush administration should be ashamed of itself on this issue,” he said, later saying that current Secretary of State Hillary Rodham Clinton should act on it if she is serious about going after the state sponsors of terrorism.

Former Rep. Tom Tancredo, R-Colo., (1999-2009) who signed a letter asking for the MEK to be de-listed a decade ago, said the November elections could have an impact on the group’s status. Ileana Ros-Lehtinen, R-Fla., the incoming chairwoman of the House Foreign Affairs Committee, is a “good friend” on the issue.

“That’s good for those of us who believe in the cause,” he said.

Ridge said he has seen evidence that the State Department may already be considering taking the group off the list.