New York Times: One of Tehran’s signature landscapes — the imposing, rugged line of the Alborz Mountains at the city’s northern boundary — has suddenly become an elusive one. Instead, Tehranis’ eyes, and complaints, have turned toward a dense and noxious wall of smog that has only rarely lifted during the past two months. 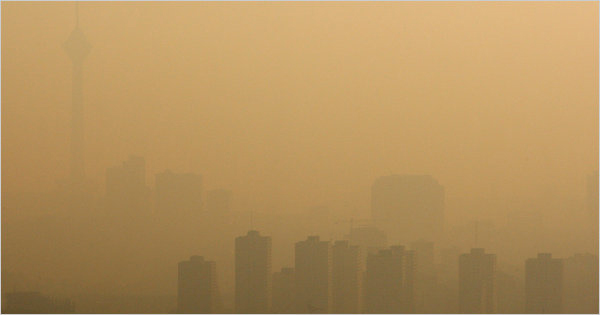 TEHRAN — One of Tehran’s signature landscapes — the imposing, rugged line of the Alborz Mountains at the city’s northern boundary — has suddenly become an elusive one. Instead, Tehranis’ eyes, and complaints, have turned toward a dense and noxious wall of smog that has only rarely lifted during the past two months.

“I had an eye infection for two consecutive weeks,” said Azadeh Kimiyai, a 32-year-old public relations manager, describing one of the health problems residents have complained about over the past month, a long list that includes headaches, dizziness and fatigue. “Two of my colleagues had the same problem. The pharmacist told us it was caused by the pollution.”

After initially issuing flat denials of a problem and then blaming a typical winter temperature inversion — despite above average temperatures throughout November and early December — the Iranian government has since resorted to drastic compensatory measures like sudden two-day public holidays and harsh traffic-control directives.

But even as such measures have begun to counter the worst of the pollution, a trickle of recent statements from politicians and officials have raised suspicions that the smog may have been of Iran’s own making, as officials ordered at least five of the country’s major petrochemical plants to switch production to gasoline after Western pressure led many of the world’s top refining companies to cut off Iran’s imports.

According to e-mails circulated to industry experts and reproduced on unofficial news sites and blogs, Iran’s new supply of domestic gasoline may contain high levels of aromatics — more than twice the level permitted by Iranian law. Burning aromatics in car engines produces exhaust packed with high concentrations of “floating particles” or “particulates” that, added to the typical smog caused by nitrous oxides and ozone, can cause a range of health problems from headaches and dizziness to more serious cardiac and respiratory complaints.

“Previous governments knew that petrochemical plants could produce this kind of gasoline,” said an oil industry expert who spoke on the condition of anonymity out of fear of retribution. “But Ahmadinejad has gone ahead and done it — despite the consequences — for his own populist and political reasons,” he said, referring to President Mahmoud Ahmadinejad.

Abdolhossein Bayat, the managing director of Iran’s National Petrochemical Company, told the state news media that pollution in the capital was unrelated to the gasoline being produced by petrochemical complexes, stating that the domestic product met and even exceeded international standards.

But Mohammad-Reza Rezai, a member of Parliament who supports the Ahmadinejad administration, seemed to acknowledge that the government had increased domestic production of gasoline and that dangerous levels of air pollution were a price worth paying to maintain Iran’s independence from foreign powers.

“The increase in pollution is natural but, unfortunately, there are some who fail to see the main issue,” he said in comments delivered to Parliament on Monday and published on the unofficial Asr Iran news Web site. “The important thing is that we have begun to produce gasoline, and this is a very valuable thing.”

“Without a doubt there are problems and impurities,” he added, “but with continued production the problems will be solved and we will achieve production of standard gasoline.”

Despite having the world’s third largest proven oil reserves, Iran has failed to expand its aging refineries to accommodate the nation’s rapidly expanding demand for gasoline, an appetite that has been whetted by low subsidized prices and a rapidly growing population of young adults who crave the independence that a motor vehicle provides.

Fuel prices were raised drastically on Sunday, as Tehran tries to phase out subsidies. But the roads remained jammed nonetheless, despite unconfirmed reports of a truckers’ strike, and after a marked improvement in Tehran’s air quality in recent days — after consecutive weeks of public holidays and traffic controls — the government has resumed issuing warnings about unsafe levels of particulates.

While continuing to deny that home-produced gasoline could have anything to do with record-breaking pollution levels, members of the Ahmadinejad administration have admitted that public health is at greater risk than ever before. Late last month, Health Minister Marzieh Vahid-Dastjerdi reported a 30 percent increase in pollution-related health problems and an 18 percent increase in emergency hospital admissions, though she did not say over what period.

However, within days, an official in Tehran’s municipal government leaked Health Ministry statistics for pollution-related deaths on his personal Web site — more than 3,600 in the first nine months of the Iranian calendar year — figures that until now had never been released to the Iranian public.

With pollution warnings this year lasting for weeks on end, the possibility that the Ahmadinejad administration may have achieved a partial victory over international sanctions at the cost of public health has alarmed industry experts and Tehran residents alike.

“If independence comes at the cost of people’s health, it’s not worth it at all,” Ms. Kimiyai said. “Instead of that, they should give up on some of their stupid demands on the international scene.”

Iran calls for international nuclear fuel centre on own soil