AFP: Germany Wednesday condemned the jailing of Iranian filmmaker and vocal opposition backer Jafar Panahi as “scandalous” and “unacceptable” and called on Tehran to lift the sentence. 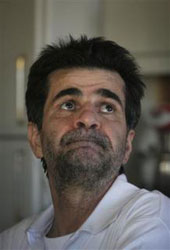 BERLIN (AFP) — Germany Wednesday condemned the jailing of Iranian filmmaker and vocal opposition backer Jafar Panahi as “scandalous” and “unacceptable” and called on Tehran to lift the sentence.

“Sentencing Jafar Panahi to six years in jail is scandalous,” said Markus Loening, in charge of Germany’s human rights policy, in a statement issued by the foreign ministry.

“It is simply unacceptable and all the more disconcerting given that Jafar Panahi’s films have offered many people in recent years an insight into Iranian society and therefore contributed considerably to intercultural dialogue.”

Loening called on authorities in Iran to recognise basic human rights and lift the sentence.

Meanwhile the Berlin film festival, which had invited Panahi to join its international jury next February, strongly condemned the “harsh sentences” handed down to the director and a colleague, Mohammad Rasoulof.

“We are very concerned and filled with indignation over the conviction of Jafar Panahi,” festival director Dieter Kosslick said in a statement.

“It is shocking that a renowned director is punished so severely for his artistic work.”

On Monday, Panahi was handed six years in jail and banned from making films or leaving Iran for 20 years, according to his lawyer. Rasoulof was also reportedly sentenced to six years’ jail.

Panahi was arrested on March 1 along with his wife, daughter and several others at his home. Most of those arrested were subsequently released. He was freed on a bail of around 200,000 US dollars in May.

Soon after his arrest, Iranian officials said he was detained for making an “anti-regime” film about the unrest which rocked Iran after the disputed re-election of President Mahmoud Ahmadinejad in June 2009.

Panahi is known for his gritty, socially critical movies such as the “Circle,” which bagged the 2000 Venice Golden Lion award, “Crimson Gold,” and “Offside,” winner of a Silver Bear prize at the 2006 Berlin film festival.

Reuters: Swiss bank UBS is cutting ties with all...