AFP: President Mahmoud Ahmadinejad and his Russian counterpart Dmitry Medvedev agreed to boost ties between their countries, in a a telephone conversation, state media reported on Monday. 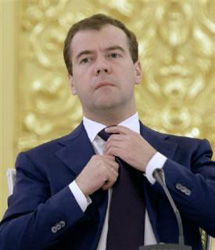 TEHRAN (AFP) — President Mahmoud Ahmadinejad and his Russian counterpart Dmitry Medvedev agreed to boost ties between their countries, in a a telephone conversation, state media reported on Monday.

The call came after Russia snubbed Iran’s invitation to visit two atomic sites in the Islamic republic that were thrown open to a group of foreign diplomats on Saturday and Sunday.

Iran and Russia must always be “friends and colleagues,” state television quoted Ahmadinejad as telling Medvedev. “The Islamic republic of Iran welcomes an increase of ties in all areas between the two countries.”

Medvedev, according to the report which did not give a date for the call, said the two long-standing allies could boost ties in energy, fuel, transportation and other commercial areas.

“Russia is ready for all cooperation with the Islamic Republic of Iran,” Medvedev was quoted as saying.

On Saturday and Sunday, Iran opened up two atomic installations to a group of foreign envoys, including some representatives of the UN atomic watchdog.

It had invited Russia and China to participate in the visit to its main uranium enrichment facility at Natanz and the heavy water facility in Arak. But both Russia and China, considered close to Iran, turned down the invitation.

Russia and China backed a fourth set of UN sanctions against Iran approved in June 2009. The sanctions were imposed to stop Iran’s nuclear programme, which the West suspects is masking a weapons drive, a charge Tehran denies.

New weapons from Iran turning up on Mideast battlefields: Abizaid

AFP: A new armor-busting rocket-propelled grenade believed to be...