AP: Iran told the Afghan government on Tuesday that it will stop blocking thousands of tanker trucks trying to move fuel into Afghanistan, authorities announced. 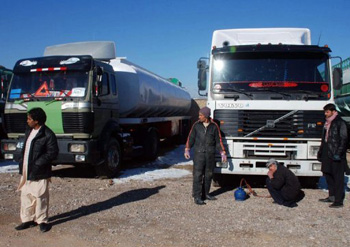 An Afghan government statement said the Iranian ambassador to Afghanistan, Fada Hussain Maliki, told President Hamid Karzai that the fuel tankers still stuck at the border would be allowed to enter Afghanistan during the next four days.

The Iranians began barring fuel trucks from crossing the Iran-Afghanistan border in late December, leaving about 2,500 trucks stuck at three crossings. The move, which Afghan officials have criticized as being tantamount to an embargo, has led fuel prices to rise as much as 70 percent.

Tehran has said the ban was linked to its recent decision to slash domestic fuel subsidies in a bid to cut costs and boost an economy squeezed by international sanctions. Afghan officials said Iran also had expressed concern that fuel shipments were supplying NATO forces in Afghanistan.

Iran supplies about 30 percent of the country’s refined fuel, Afghan officials say. The remainder of the blocked shipments come from Iraq and Turkmenistan, but must transit through Iran.

Between 1,400 and 1,500 of the original 2,500 stranded tankers are still waiting to cross into Afghanistan. Shirzai said Iran allowed about 40 tanker trucks to cross the border at three crossings on Monday.

The presidential statement said Iran has asked the Afghan government to confirm the country’s fuel needs, and then it will allow that much fuel to enter.

“It is very difficult for the poor people,” Mohammad Asif, a Kabul resident, said Tuesday. “I have a motorbike and to fill it with fuel costs lots of money. It is a very bad action” by the Iranian government.

One of the reasons the tankers remained stuck at the border was because Afghanistan had refused to disclose the amount of its domestic fuel consumption, according to the semiofficial Fars news agency in Tehran, which quoted a statement by the Iranian embassy in Kabul. The embassy statement said Iran had allowed 929 fuel tankers carrying more than 70,000 tons of fuel to enter Afghanistan since Dec. 20 and that future cross-border shipments would be based on a mutual agreement between the two nations.

“During the meeting, Karzai emphasized the deep relations and friendship of the two countries — which have lived like brothers,” the statement said. “Karzai said this friendship should not be harmed by stopping fuel tankers during the hard days of winter.”

About 60 businessmen, all are members of the Afghan Chamber of Commerce, issued a resolution pledging to stop commerce with Iran. They also said they would not attend an upcoming economic conference being held in Tehran.

“If the Iranian government does not change its decision in order to release the Afghan tankers, the Afghan private sector will continue to block their imports and exports from Iran and also suspend its investments in Iran,” said Mohammad Qurban Haqjo, chief executive officer of the chamber.

The fuel tanker issue also has prompted protests in Kabul and in Herat province, which borders Iran. The complaints commission of the upper house of the Afghan parliament on Monday strongly condemned Iranian interference in Afghanistan. An Afghan political party has collected more than 200,000 signatures and fingerprints of angry Kabul residents on a petition protesting the blockade.

Najibullah Kabuli, a former member of the Afghan parliament from Kabul and leader of the National Participation Party, said he submitted the 300 meter- (yard-) long petition from Kabul residents upset about Iranian interference in Afghanistan to the U.N. office in Kabul on Monday.

“The Afghan government is quiet and has shown no reaction” to the blockade, he said. “The National Participation Party has taken this step to show a strong reaction and is requesting the support of the international community.”

Commerce Minister Anwarul Haq Ahady, who traveled to Moscow this week, is working to increase fuel imports from other countries such as Russia, Kazakhstan and Turkmenistan. Some Afghan businesses already have struck deals with Russian companies and the Afghan government hopes that more are coming.

Their efforts appear to be having some effect as fuel prices, which rose from about $900 a ton to about $1,500 after the blockade began, have now dropped to about $1,350 a ton.

Associated Press Writers Amir Shah and Rahim Faiez in Kabul and Nasser Karimi in Tehran contributed to this report.

Iran says suspension of enrichment is a thing of the past