Wall Street Journal: Egypt’s uprising has captivated the Arab world, but in Iran—fresh from its own outpouring of antigovernment unrest—backers of the regime and supporters of the beleaguered opposition are competing for credit for inspiring the demonstrations in Cairo. 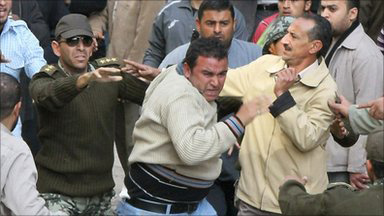 Egypt’s uprising has captivated the Arab world, but in Iran—fresh from its own outpouring of antigovernment unrest—backers of the regime and supporters of the beleaguered opposition are competing for credit for inspiring the demonstrations in Cairo.

Protests in Egypt calling for the resignation of President Hosni Mubarak have also reinvigorated Iran’s opposition, triggering calls to regroup. After contested presidential polls in the summer of 2009, hundreds of thousands of Iranians poured onto the streets to protest the re-election of President Mahmoud Ahmadinejad, amid allegations of voter fraud.

Iranian government forces snuffed out the demonstrations with violence, mass arrests, the suspension of Internet and phone service and broad intimidation. The streets of Tehran and most other Iranian cities have been mostly quiet since early last year.

But on Sunday, the main student activist website, Daneshjoo News, issued a statement calling for a big opposition demonstration on the anniversary of the Islamic Republic on Feb. 12th. Bloggers also are calling on opposition leaders to rejoin the fray.

“The democracy movement we started is spreading in the region and today we are witnessing the awakening of the Arabs. It’s time for us to once again join hands and prove to the world that dictatorship must end,” the Daneshjoo News statement said.

On the streets of Tehran, a new slogan is being sprayed on walls: “Seyed Ali, go be with Ben Ali”—refering to Iran’s Supreme Leader Ayatollah Ali Khamenei and Tunisia’s former President Zine al-Abidine Ben Ali, who was ousted by protests in that country earlier this month. The Tunisian protests helped inspired the current unrest in Egypt and antigovernment protests in other Arab countries, including Yemen, Algeria and Jordan.

Iranian state media, meanwhile, are portraying Egypt’s uprising as a better-late-than-never Islamic revolution, similar to the one that toppled the Shah and paved the way for Iran’s current Islamic Republic, more than 30 years ago. State media have also painted the protests as a popular outpouring against Egypt’s alliance with the U.S. and longstanding peace with Israel.

Official news agencies prominently ran excerpts of a speech last year by Mr. Khamenei. In it, he mentioned the growing division between Egypt’s ruler and the public, and concluded: “I have no doubt that a new Middle East will take shape and, with God’s help, it will be an Islamic Middle East,” according to IRNA, the official news agency.

Egypt and Iran have had tense relations for the past thirty years. Iran’s regime has always viewed Mr. Mubarak as too close to the U.S. Mr. Mubarak, a secular ruler, has worried about Iran’s influence among Islamic groups in the region.

The two countries severed diplomatic ties in 1980, a year after Iran’s revolution and the signing of the Egyptian-Israeli peace treaty. Iranian officials expressed hope on Sunday that a regime change in Egypt will lead to warmer and better relations, according to Iranian news agencies.

Opposition leader Mir Hossein Mousavi issued a statement on Saturday praising Egyptians for their courage and wishing them success. He dismissed the idea that their grievances had anything to do with Islam and highlighted people’s call for democracy and reform.

“I can say with no doubt that the starting point of what we are witnessing in the streets of Tunis, San’a, Cairo, Alexandria and Suez stems from the demonstrations in the streets of Tehran, where millions of Iranians marched in June of 2009,” Mr. Mousavi said.

Over the weekend, Iranian bloggers were posting a one-line message on social-networking sites and on opposition websites: “We are all Egyptian today.”

By Jubin Katiraie The United States would only lift...