Reuters: The trial in Nigeria of an alleged member of Iran’s Revolutionary Guards over an arms shipment seized last year in the West African country has been postponed until later this week, lawyers said on Monday. 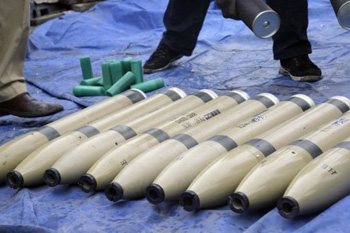 ABUJA, Jan 31 (Reuters) – The trial in Nigeria of an alleged member of Iran’s Revolutionary Guards over an arms shipment seized last year in the West African country has been postponed until later this week, lawyers said on Monday.

Azim Adhajani was charged last November with importing prohibited firearms after a shipment of mortars and rockets from Iran was seized in the main port of Lagos, apparently putting Tehran in breach of U.N. sanctions.

Adhajani, who Nigeria’s secret service says is a member of the Revolutionary Guards, appeared in court on Monday in the capital Abuja with three alleged Nigerian accomplices for what was meant to be the start of his trial.

But Judge Hafusat Soso dismissed the case after the prosecution filed fresh charges at a federal high court in Lagos, saying it would be easier for them to use the seized weapons as evidence if the case was heard there.

“The honourable Attorney General … took this decision because in the course of the trial before this court, the exhibits will have to be tendered,” said Moses Idakwo, a prosecuting lawyer for the Nigerian secret service.

“It not only cumbersome but dangerous to move the containers to this place,” he told reporters.

The seized weapons included assorted calibres of mortars and 107 mm rockets — designed to attack static targets and used by armies to support infantry units — as well as shells for a 23 mm anti-aircraft gun, according to court documents.

They were hidden in containers marked building materials.

Nigeria reported Iran to the U.N. Security Council two months ago over the seizure, which was an apparent breach of sanctions imposed over its nuclear programme.

A United Nations panel of experts visited Nigeria this month to try to assess whether that was the case.

Diplomatic sources told Reuters shortly after the goods were seized that two members of the al-Quds force — an elite unit of the Revolutionary Guards which specialises in foreign operations for Iran — had taken refuge in the Iranian embassy.

Nigeria’s secret service questioned one of the men, believed to be Adhajani, but were unable to question the second because he had diplomatic immunity.

Intelligence officials say Adhajani’s trial could prove uncomfortable for Iran, potentially exposing the extent to which al Quds has established a presence in West Africa and damaging its quest for closer ties with Africa.

Soso formally discharged Adhajani and Abuja-based businessman Ali Usman Abbas Jega but they were immediately re-arrested in front of the court and are expected to appear for trial in Lagos later this week.

Jega pleaded not guilty at an initial hearing in November while Adhajani declined to enter a plea, saying he needed his embassy to represent him. His lawyer, Chris Uche, on Monday accused the prosecution of deliberately stalling.

“This smacks of extreme bad faith … This is persecution and not prosecution,” he told reporters.

The two other Nigerians — customs clearing agents Ali Oroji Wamako and Mohammed Tukur — were dismissed after the prosecution withdrew charges against them, saying they had not been aware of what was inside the containers. (For more Reuters Africa coverage and to have your say on the top issues, visit: af.reuters.com/ ) (Writing by Nick Tattersall)