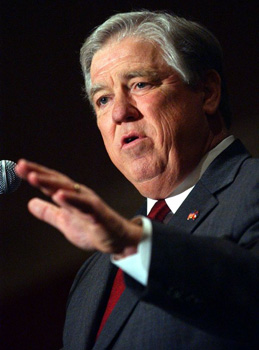 Barbour, who is a potential 2012 presidential Republican candidate, says world leaders should be judged by their success in responding to Iran’s nuclear program and what he says is its support for terrorism and destabilizing governments abroad.

The popular governor received a warm ovation from a prestigious security conference Wednesday in Israel — where Iran and its nuclear program are a major concern.

Barbour, whose own state is an energy producer, criticized an American moratorium on drilling put in place by the Obama administration after last year’s BP oil spill. He says the ban “is inflicting a disaster on America.”

U.N. has no objections to Iran speech

AP: Security Council members have raised no objections to...