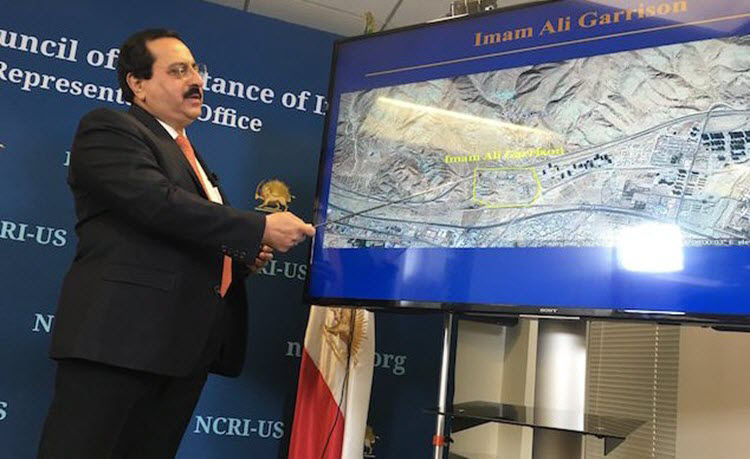 London, 22 Jun – The Iranian Resistance group, the National Council of Resistance of Iran (NCRI) held a press conference in Washington on Tuesday, to expose the real threat of the Iranian Regime’s ballistic weapons programme.

It appears that in the wake of the nuclear deal, which severely limited the research and development of nuclear weapons in Iran, Supreme Leader Ali Khamenei ordered the Iranian Revolutionary Guard Corps (IRGC) to focus on their ballistic missiles instead.

Members of the People’s Mojahedin Organization of Iran (PMOI/MEK), the largest faction within the NCRI, revealed 42 sites related to the production, testing, and launching of ballistic missiles.

Alireza Jafarzadeh, Deputy Director of the NCRI’s US office, said: “A dozen of these sites were revealed for the very first time. Among the 42 sites, 15 are part of the regime’s missile manufacturing network. These 15 centres include several factories related to a missile industry group and together form a web of dozens of missile production facilities.”

Only two of these are officially recognised by the Iranian Regime indicating that, as when the MEK revealed Iran’s nuclear programme, the Regime is trying to hide their intentions.

The Regime has claimed that they are building and launching missiles, as they did in Syria on Sunday, in order to defeat ISIS but Jafarzadeh rebuffed that.

He said: “The primary reason for launching these missiles was in no way ISIS.”

The Regime has also been working with North Korea on the missiles and missile sites and it is worrying that they could easily combine the ballistic missiles with nuclear weapons once the nuclear deal runs out in less than 10 years.

Shahriar Kia, an Iran expert and human rights activist, wrote on American Thinker: “In contrast to the ruling mullahs in Tehran, the Iranian people welcome change and deploy the regime’s nuclear and missile programs, and abhor their meddling across the region.”

He continued: “It is high time the international community adopted a united and firm policy on Iran based on the following pillars: Imposing sweeping sanctions targeting Iran’s missile program and blacklisting the IRGC for its role in directing Iran’s support of terrorism.”

Over the past two decades, the MEK have provided the US and its allies with large amounts of information on the secret plans of the Iranian Regime from their nuclear programme to their terrorist training camps.

US skeptical of Iran offer on Iraq talks