AFP: The Berlin film festival will honour dissident Iranian film-maker Jafar Panahi, who was sentenced to prison in December, on the anniversary of the Islamic revolution Friday. 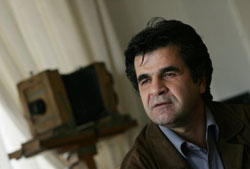 BERLIN (AFP) — The Berlin film festival will honour dissident Iranian film-maker Jafar Panahi, who was sentenced to prison in December, on the anniversary of the Islamic revolution Friday.

Following tributes in Cannes and Venice, Berlin invited Panahi to serve on its jury. But though he is free on bail after receiving a six-year jail sentence and a 20-year film-making ban, he is barred from travelling abroad.

The 61st Berlinale, as the event in known, has held a place open on the jury, chaired by Italian-American actress Isabella Rossellini, for Panahi “to show its support for his struggle for freedom”.

“We are still hoping that he will be able to come. We haven’t given up,” the Italian-American actress told reporters at the festival’s opening news conference Thursday, as she sat next to his vacant chair.

“He is a very big presence even though he is not here,” she added, stressing that the decision to include him on the panel in absentia was a reminder that “freedom of speech is at the base of freedom of art and film-making.”

Panahi was convicted of illicit propaganda for working on a film about unrest after the disputed re-election of Iranian President Mahmoud Ahmadinejad in June 2009.

Film-makers, writers and artists have complained of increased censorship under Ahmadinejad’s presidency.

Festival director Dieter Kosslick has repeatedly appealed to Iranian authorities to allow Panahi, whose cause has also attracted the support of Hollywood giants Steven Spielberg and Martin Scorsese, to attend the event.

“Offside”, Panahi’s comedy about girls who dress up as boys so they can sneak into a football match, will screen Friday in the festival’s main showcase in place of a competition film.

Panahi, a 50-year-old veteran of the Iran-Iraq war who tackles taboo issues such as prostitution and the oppression of women in his work, won a Silver Bear prize for “Offside” at the Berlinale in 2006.

The 10-day event will showcase another four of Panahi’s award-winning pictures such as “The Circle” and “Crimson Gold”, introduced by Iranian directors and actors.

This year’s competition among 16 international contenders will feature compatriot Asghar Farhadi, who won a best director prize for his haunting drama “About Elly” at the 2009 festival.

His latest picture, “Nader and Simin, A Separation” about an estranged couple reunited by a surprise event, will premiere Tuesday.

Farhadi faced a production ban by Iranian authorities while making the film for comments in support of Panahi. The ban was later lifted.

Next Thursday, the festival will hold a panel discussion entitled “Censored Cinema” with Iranian film-makers and artists on “censorship, and the restriction of freedom of opinion and expression in Iran”.

It will feature director Rafi Pitts, whose political thriller “The Hunter” appeared in the 2010 competition, Ali Samadi Ahadi, who made searing documentary “The Green Wave” about the 2009 opposition protests, as well as author-activist Mehrangiz Kar.

Samadi Ahadi, who lives in Germany, said that negotiations between the West and Iran on Tehran’s disputed nuclear programme, for example, were intertwined with the human rights issue.

“Iranian cinema is in a kind of state of emergency right now because the government has not really let people work in Iran since 2009,” he told Berlin magazine Tip.

“The fact that festivals like the Berlinale declare their solidarity and leave a place for Panahi on their jury is more than just a gesture. Because if the Iranian government tramples on the rights of its own people, why should it not do the same with the international community?”

US lawmakers concerned by potential sale of Boeing planes to Iran