Briton vows to appeal US extradition over Iran claims

AFP: A judge ruled Friday that a retired British businessman can be extradited to the United States on charges of conspiring to sell missile parts to Iran, but the man immediately vowed to appeal. 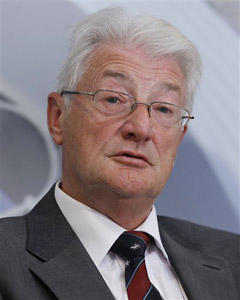 LONDON, February 11, 2011 (AFP) – A judge ruled Friday that a retired British businessman can be extradited to the United States on charges of conspiring to sell missile parts to Iran, but the man immediately vowed to appeal.

Christopher Tappin, 64, denies attempting to sell batteries for surface-to-air missiles, which were to be shipped from the United States to Tehran via the Netherlands.

He says he was unaware that batteries he sourced in the United States were destined for Iran, and says he was caught up in a US customs sting.

Tappin has fought a long battle against extradition to the United States, where he could face 35 years in jail, and said Friday that he would not give up.

District Judge John Zani ruled at City of Westminster Magistrates’ Court in central London on Friday that the extradition could go ahead, but released Tappin on conditional bail.

Speaking outside the court, Tappin said he would challenge the ruling in the High Court, and accused US agents of acting illegally to entrap him.

“There remains clear evidence of fraud, which they have tried to cover up by implicating myself and others by means of skullduggery and misleading statements,” he told reporters.

“I look forward to winning the next round of this intriguing case. I am sure that justice will eventually prevail, preferably British justice.”

In his ruling, the judge said there was “ample evidence” that Tappin and his alleged co-conspirators were “willing and apparently enthusiastic participants” in the alleged crime.

“I am not satisfied that this is a case of ‘state-created’ crime, nor that unlawful entrapment has taken place,” he said.

The judge also rejected arguments that Tappin’s extradition should be blocked on human rights grounds because his wife has a debilitating illness.

AP: Iran has taken its case against the United...

Sunday Telegraph: Pakistan has conceded for the first time...