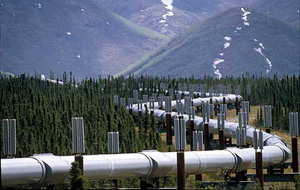 Iran will “witness a change in the revenues of the country from crude oil to natural gas,” said Javad Owji, managing director of National Iranian Gas Co., according to the state-run Mehr news agency. Owji, who didn’t specify how much Iran earns from oil and gas sales separately, pointed to the country’s goal to triple gas shipments to some of its neighbors.

Iran, one of the producers of the 12-member Organization of Petroleum Exporting Countries, is battling U.S. and European Union energy sanctions over its nuclear program that have limited its oil sales. The Persian Gulf country also holds the world’s second-largest gas reserves and its gas industry isn’t subject to the same restrictions.

Iran has also pushed ahead with plans to deliver gas to Pakistan. Last month, the two countries started work on the cross-border leg of a $1.3 billion gas pipeline that will deliver 21.5 million cubic meters of gas a day to Pakistan for 25 years.

US aid for Russia linked to Iran

AP: A U.S. program to keep Russian scientists from...