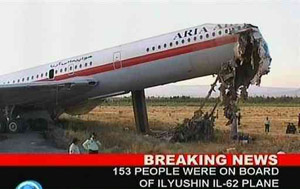 The ban affects 17 Tupolev TU 154 planes which were in service with four Iranian airlines, the head of Iran’s Civil Aviation Organisation, Reza Nakhjavani, was quoted as saying on the state television website.

The decision to ban Iranian airlines from using the aircraft was taken in 2010 after a series of crashes involving leased aircraft flown by pilots from former Soviet countries.

In January, Nakhjavani announced that Iranian airlines had six months to employ local crews on their flights.

On Sunday, he said Iranian airlines had purchased 35 aircraft to replace the Tupolevs and modernise their fleet. He did not go into details.

For the past 30 years, Iran has been unable to buy new Boeing or Airbus planes in the face of a US embargo on the sale of new aircraft or equipment.

But it has managed to obtain second-hand aircraft from the international market.

The decision to replace its aging civilian fleet was also taken under pressure from the European Union, which banned state-run Iran Air’s B727 and B747 from flying over its territory for “security reasons.”

Iran has witnessed a dozen air crashes which have killed nearly 1,000 people over the past decade.

In January, 77 passengers were killed and 27 injured when a B727 Iran Air plane crashed in bad weather in the northwestern city of Orumieh. The crash led to sacking of the transport minister.

Toronto Star: A Toronto-area man who was imprisoned...