AP: U.S. Secretary of State Hillary Rodham Clinton on Friday accused Iran of trying to derail democratic revolutions around the Mideast and warned Arab nations not to permit intolerance against women and religious minorities. 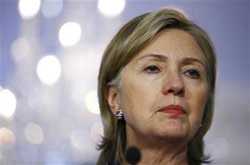 BERLIN (AP) — U.S. Secretary of State Hillary Rodham Clinton on Friday accused Iran of trying to derail democratic revolutions around the Mideast and warned Arab nations not to permit intolerance against women and religious minorities.

Clinton said Iran was clearly trying to use uprisings around the region to further its own goals and foment broader unrest while at the same time cracking down on its own reform movement.

“I think that that everyone is aware if its efforts to exploit and even hijack what are legitimate protests. But certainly in an era of instant communication we hope that people will not be fooled by their tactics.”

Clinton said the U.S. sees “no evidence yet that Iran instigated such protests but we do see activities by Iran to try to take advantage of these uprisings.”

Accepting an award named for a pre-Nazi era German Jewish businessman, politician and foreign minister who was murdered for his promotion of inclusion and tolerance, Clinton said she was disturbed by recent developments in post-revolt Egypt in which women and Coptic Christians were singled out for attacks and abuse. They are signs, she said, that extremists are intent on seizing transitions for their own aims.

The 1922 assassination of Walter Rathenau, was “a cautionary tale about how these transitions can be undermined by intolerance and hijacked by extremists,” she told a ceremony in Berlin.

She said the incidents in Egypt were testing the unity of pro-democracy demonstrators whose peaceful protests ousted Egypt’s authoritarian president and could fracture the reform movement.

Clinton said she feared similar backsliding elsewhere in the Mideast and stressed it was critical for Egyptians and other Arabs whose nations are in the throes of change to resist intolerance and demand that their new leaders embrace open and inclusive governments.

“It will be critical,” she said, for citizens and leaders “to work together to resist these dangers and keep their nations on track to become open, inclusive, pluralistic democracies.”

“Democracy is a never-ending task that requires participation and protection and it is only possible if every citizen can enjoy its benefits,” she said. “Societies thrive when all their people contribute and participate. But they stagnate when women are excluded or minorities are persecuted.”