Iran gets the hump over camel price link to accident payouts

The Guardian: Iran’s judiciary causes national row by doubling compensation for fatal road accidents to the price of 100 camels. 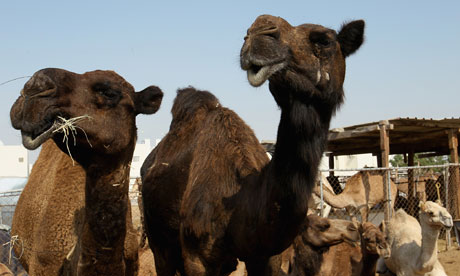 With soaring fuel costs, chronic traffic jams and the devil-may-care recklessness of fellow drivers, Iranian motorists probably thought they already had enough to contend with.

Insurers, motorists and even President Mahmoud Ahmadinejad have got the hump over a decision to link compensation payments for accidents on the country’s notoriously high-speed roads to the market price of the slow-moving beasts more commonly associated with desert travel.

Iran’s judiciary – which is independent of Ahmadinejad’s government – has decreed that from next week compensation or “blood money” for relatives of fatal road accident victims should equal the price of 100 camels.

That will have the effect of doubling compensation payouts from 450m to 900m rials (£52,000). The judiciary spokesman, Gholam-Hossein Mohseni-Ejei, said the steep rise was due to a failure to link annual compensation rates to the price of camels in recent years, meaning awards had been artificially low.

“Unfortunately, during the last few years, the price of camels has been calculated only once,” he told Iranian journalists. “Every year, compensation money has increased according to the inflation rate and this calculation has been wrong.”

He said Iran’s interpretation of Islamic law allowed blood money to be based on the price of 100 camels, 1,000 sheep, 200 cows, quantities of gold or silver, or 200 items of Yemeni clothing.

Officials decided the price a camel currently fetches in three remote Iranian provinces, around 9m rials (£520), was the fairest measure.

Insurance companies have reacted furiously, saying they could be bankrupted by demands for increased payouts in a country that already has one of the world’s highest fatal road accident rates, with an estimated 23,000 people killed each year.

Critics also fear many drivers will stop paying insurance altogether to evade higher premiums – causing a jump in the number of motorists being jailed for failing to meet compensation payments.

Ahmadinejad, angered by suggestions that his government should subsidise insurance firms to help them cope, has pledged to raise the matter with the supreme leader, Ayatollah Ali Khamenei.

Traffic police and the state-run compensation board say the increase will encourage safer driving. Justifying the move, Assadollah Joolaei, head of the compensation board, equated safe driving with stopping smoking.

“If that smoking driver saves his cigarette money, he can reduce his insurance fee,” he said.

US Supreme Court to examine case of brother of Iran dissident

AFP: The US Supreme Court announced Monday it will...