Reuters: The man President Mahmoud Ahmadinejad has appointed oil minister is the “worst choice” who will damage Iran’s vital energy sector, the head of parliament’s energy committee said on Friday. 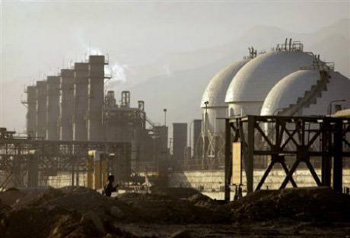 The stinging criticism comes after Ahmadinejad finally relinquished the role of caretaker oil minister himself — a role the both parliament and Iran’s constitutional watchdog said was illegal — and appointed Mohammad Aliabadi, one of his close allies, to the post.

“Selecting Mr Aliabadi might be the best choice for Mr Ahmadinejad, but, from the national perspective, this is the worst choice for the oil and gas industry in the current situation and these kinds of decisions will jeopardise the country,” Hamid-Reza Katouzian was quoted as saying by the semi-official Mehr news agency.

Ahmadinejad stunned rivals within the conservative ruling elite last month when he sacked Oil Minister Massoud Mirkazemi, as part of a plan to merge several ministries to cut their number to 17 from 21, and put himself in charge of the ministry.

He acted in the run-up to a crucial OPEC meeting on June 8 where the producers’ group may decide to increase output targets if they consider the oil market under-supplied. Iran is OPEC’s second-largest producer and often its leading advocate of higher prices.

It initially looked likely that Ahmadinejad would attend the Vienna meeting himself, a prospect analysts said lessened the chances of raising output targets as he would use the occasion to drive home Iran’s hawkish stance on price.

The move had even greater repercussions inside Iran where Ahmadinejad’s critics accused him of a power grab. Parliament issued a report on Wednesday that called his action “illegal and hasty” and accused him of “illegal interference with governmental financial resources.”

By appointing Aliabadi, head of Iran’s Olympic Committee and a former vice-president, Ahmadinejad may have hoped to shake off the criticism, but Katouzian was unequivocal that he was not the right person for the job.

“In my opinion, this is an unjustifiable choice and the oil and gas (industry) will be harmed by these kind of decisions.”

“Oil and gas is a completely professional field of which Mr Aliabadi does not have any experience,” he continued. “It is not right to introduce someone even as a caretaker of the Oil Ministry who does not know the language of communication with the body of the Oil Ministry.”

Iran’s president can appoint caretaker ministers for up to three months before seeking parliament’s approval. If Katouzian’s comments represent the widespread view of lawmakers, Aliabadi will have difficulty getting parliament’s nod to keep the post on a permanent basis.

The tussle over the Oil Minister is part of a wider power struggle in which Ahmadinejad appears to have been weakened.