McClatchy Newspapers: Thousands of supporters of Iran’s leading opposition group rallied outside the State Department on Friday, calling on the agency to take the group off its list of terrorist organizations. 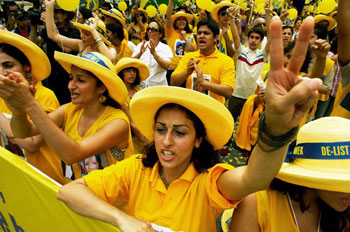 WASHINGTON — Thousands of supporters of Iran’s leading opposition group rallied outside the State Department on Friday, calling on the agency to take the group off its list of terrorist organizations.

Former Pennsylvania Gov. Ed Rendell and several other politicians addressed the mostly Iranian-American crowd, which gathered at midmorning in support of the People’s Mujahedeen of Iran, commonly referred to by the initials of its Farsi name, MEK.

The State Department has classified the MEK as a terrorist organization since 1997, citing its alleged involvement in multiple assassinations of Americans in the 1970s and the 1979 takeover of the American Embassy in Tehran. From 1986 through the U.S.-led invasion of Iraq, the group relied on the late Iraqi dictator Saddam Hussein for funding and military support, according to a State Department report released this year.

Supporters of the group, however, say it’s posed no threat to the United States for years. They say it serves the U.S.’s national interest to back the group, which ultimately could help topple Iran’s dictatorship as opposition groups have done in Tunisia, Egypt and Libya.

“The evidence is overwhelming,” Rendell, a Democrat, told the demonstrators Friday as he called on the State Department to delist the MEK. “The time is now.”

Demonstrators — decked in the MEK’s blue and yellow — heard a similar message from Patrick Kennedy, a former Democratic congressman for Rhode Island.

“The future of Iran is right in here in front of me,” Kennedy said. “Your cause is our cause, is the cause of democracy and human rights.”

The State Department is reviewing the MEK’s designation, but no final decision has been made, spokesman Mark Toner said last month at a news briefing. Reached late Friday afternoon, a department spokesman declined to comment about the day’s protest.

The rally brought Iranian-Americans to Washington from across the country. Hoora Mostashari, 50, flew in from Orange County, Calif., to protest what she sees as American appeasement of Iran’s leaders.

“It’s a failed policy from Neville Chamberlain until now,” she said, in reference to the former British prime minister who favored appeasement over confrontation with Adolf Hitler.

Mostashari said she was hopeful that the Arab Spring revolutions would reach Iran, a country she left for the United States in 1976.

Los Angeles Times: Iran, which has for years supplied...

Reuters: The quality of gasoline produced in Iran in...