Washington Post: Politicians, former national security officials and thousands of others gathered outside the State Department on Friday to call for the removal of the Mujahedin-e Khalk, an Iranian opposition group, from the list of foreign terrorist organizations. 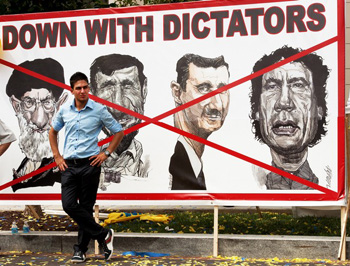 Politicians, former national security officials and thousands of others gathered outside the State Department on Friday to call for the removal of the Mujahedin-e Khalk, an Iranian opposition group, from the list of foreign terrorist organizations.

Beethoven’s “Ode to Joy” blasted from large speakers and doves and clouds of confetti flew into the air as former congressman Patrick J. Kennedy (D-R.I.) introduced the group’s leader, Maryam Rajavi, to speak by video link from Paris.

“I salute your protest and gathering, which symbolizes an uprising for the freedom of the Iranian people,” said Rajavi, speaking in Farsi.

The controversial group, usually called by the acronym MEK, is made up of exiled Iranian dissidents who organized in the 1960s and now are mounting a political and legal campaign to end their designation as terrorists.

The group violently opposed the rule of the shah and initially supported the Islamist regime that came to power in 1979, but they became disillusioned with the theocracy and eventually fled amid growing hostility.

Some went to Europe, and others went to Iraq, where they built a heavily fortified base, called Camp Ashraf, northeast of Baghdad. MEK fought with Saddam Hussein’s forces against Iran. The U.S. designated MEK a terrorist group in 1997 after blaming it for attacks on Iranian government institutions in which dozens were killed, including Americans working in Tehran.

Kennedy said the group does not nowcommit acts of terrorism or pose a threat to the United States. He and others hailed the group as a legitimate alternative to Iran’s repressive government.

“How much worse can we do than the mullahs in Tehran now?” Kennedy asked. “Does it make sense to shackle the primary opposition group internationally? You may not like them. They may not have a lot of support. . . . But we ought to be on the opposite side of what Tehran favors as a matter of principle.”

Retired Army Col. Wesley Martin said: “The opposition in Iran has been sent to the gallows or prison. [MEK is] the only external organization with influence.”

A growing number of high-profile figures support removing the MEK from the list of terrorist groups. Those who have spoken in support of the move include retired Army Gen. Hugh Shelton and retired Marine Gen. Peter Pace, both former chairmen of the Joint Chiefs of Staff; retired Marine Gen. James L. Jones, who was President Obama’s national security adviser; and former Vermont governor Howard Dean (D).

Lawmakers from both parties have criticized the Obama administration for not moving swiftly to clear MEK’s name or to facilitate a move to a country outside Iraq. Administration officials say there remains concern about the group’s nature.

“This is a group that has a lot of blood on its hands, including American blood,” said a senior administration official, who insisted on anonymity because legal and political decisions were being made about MEK. “We don’t want to be in a position where we later determine that a de-listed group has returned to violence.”

Many people in the Iranian diaspora support MEK, but within Iran, it has limited support even among opposition movements.

After the 2003 invasion, MEK members were offered American protection in exchange for giving up their weapons, but they are reviled by the Iraqi government because of their association with Saddam Hussein. About 3,400 members still live at Camp Ashraf, where there have been clashes with Iraqi government forces.

Speaking at the event Friday, former FBI director Louis J. Freeh called for American support for the group as U.S. troop levels decline in Iraq. He said abandoning MEK to Iraqi Prime Minister Nouri al-Maliki, whom he accused of collusion with the Iranian regime, could lead to a massacre “worse than Srebrenica,” a reference to a notorious 1995 atrocity during the war in Bosnia.

Iraqi authorities have long called for MEK to leave the country. Members would likely face detention and punishment in Iran, and it is difficult to resettle them in other countries as long as the United States designates them as terrorists.

“I think the U.S. should be willing to take at least some of these people, because we have agreements with them,” said Rep. Dana Rohrabacher (R-Calif.), who in most cases is a hard-liner on immigration issues. He said the group had provided intelligence on Iran to the United States.

Rohrabacher said he had received campaign donations from individuals linked to the group. Many other officials, including Freeh, have received money for speaking at events supporting MEK. Freeh said he received no compensation for attending Friday’s event.

“The issue is whether the group should be on the list,” he said. “Are these people being paid to say something they do not believe in? Absolutely not.”

MEK says it receives money largely from wealthy Iranian American families who support its cause, but it does not disclose the names of donors.

Alireza Jafarzadeh, a spokesman for MEK, said the group should be removed because it does not currently support terrorism and poses no threat to the United States.

There were large numbers of people at the demonstration Friday, but some seemed confused about its purpose.

“We need to go out and let our voices be heard,” said David Smith, 27, who had traveled from New York on a bus with other members of his church after their pastor encouraged them to attend. Smith said he did not know the name of the organization holding the rally or the country it is from.

Investors wary of risk ahead of Iran deadline