New York Times: Iran announced the mass production of a new cruise missile on Wednesday, the latest in a series of belligerent-sounding proclamations from that country in the face of its increased isolation by a Western-led group of nations worried about Iran’s nuclear program and avowed hostility toward Israel. 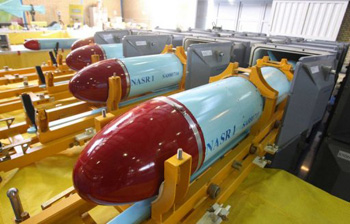 Iran announced the mass production of a new cruise missile on Wednesday, the latest in a series of belligerent-sounding proclamations from that country in the face of its increased isolation by a Western-led group of nations worried about Iran’s nuclear program and avowed hostility toward Israel.

Brig. Gen. Ahmad Vahidi, Iran’s defense minister, said the new missile, first unveiled a month ago and known as the Qader, which means Able in Farsi, had been mass-produced “as quickly as possible,” the country’s state-run media reported. The missile, designed to destroy warships and coastal targets, has a range of about 125 miles, the media said.

The announcement coincided with front-page headlines in a number of Iranian newspapers quoting the head of Iran’s navy, Rear Adm. Habibollah Sayyari, as saying he intended to deploy Iranian warships close to the Atlantic coast of the United States to reciprocate for the patrols in the Persian Gulf by the United States Navy’s Fifth Fleet. The patrols are a constant source of irritation to Iran.

“Like the arrogant powers that are present near our marine borders, we will also have a powerful presence close to American marine borders,” the official Islamic Republic News Agency quoted him as saying.

The admiral gave no indication when such deployments might happen or how many ships he intended to dispatch. Nor was there any explanation of how the vessels, thousands of miles from home in unfriendly territory, might refuel or replenish supplies.

Obama administration officials downplayed the Iranian admiral’s remarks. Jay Carney, the White House spokesman, told reporters in Washington that the United States did not take them seriously “given that they do not at all reflect Iran’s naval capabilities.”

In another slap at the United States, General Vahidi also rejected any thought of creating a telephone hotline between Tehran and Washington. The idea that was floated a few weeks ago by Adm. Mike Mullen, the outgoing chairman of the Joint Chiefs of Staff, as a way of avoiding an accidental confrontation in the Persian Gulf, where American and Iranian naval vessels and aircraft sometimes operate within sight of each other.

Admiral Mullen noted that even “in the darkest days of the Cold War” the United States and Soviet Union had such a relationship, and that he worried about the absence of a hot-line connection with Iran.

“We do not need such a line in the region,” General Vahidi said, according to Iran’s Fars News Agency. “They are seeking to set up a hotline in order to solve any potential tensions, whereas we believe if they leave the region, there will be no tension.”

His remarks may also have been an indirect slap at Iran’s president, Mahmoud Ahmadinejad, who endorsed the idea of a hot line when asked about it last week at a news conference at the end of his visit to the United Nations. Mr. Ahmadinejad’s standing within Iran’s hierarchy is in question because of his clashes with Parliament and the supreme leader, Ayatollah Ali Khamenei.

Iran’s latest military pronouncements come against a backdrop of continued foreign skepticism about its claims of peaceful nuclear energy development. Even Turkey, which has cordial relations with Iran, recently agreed to be one of the host countries for part of a new missile-interceptor system designed by the United States, which has expressed concern that Iran may be developing a nuclear weapon that can be delivered via a long-range missile.

Last week, American officials confirmed that the Obama administration had quietly provided Israel with bombs capable of destroying buried targets, including sites in Iran that could possibly house such a nuclear weapons program. Israel considers Iran its most dangerous enemy, and had been pressuring the United States for a supply of the so-called “bunker-busting” bombs .